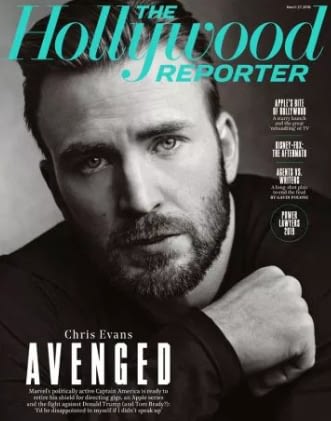 –Chris Evans covers the new issue of the Hollywood Reporter, where he talks about saying goodbye to the Avengers (“It’s a really obnoxious notion for an actor to say they’re going to retire — it’s not something you retire from”), what he’s looking for in a relationship (“I really like to be with someone who also has their own thing to do as well, you know? If I’m with someone who just kind of adopts my life, that can feel a bit suffocating”) and why he’ll never stop shit-talking Trump on Twitter (“You don’t want to alienate half your audience. But I’d be disappointed in myself if I didn’t speak up”).

-Sources are telling People that Colin Jost and Scarlett Johansson are talking about marriage. I don’t understand life.

–Justin Bieber is having a rough week. The poor kid announced that he’s taking a break from music for his mental health, and now a woman was arrested after barging into his hotel room.

-The NYT’s 10 Things I Hate About You oral history just made this week 1000% better.

–Seth Rogen is launching a Canadian cannabis company, which is very on brand.

-Speaking of Russian Doll, the show’s Charlie Barnett just landed a spot on season two of You.

-I like this profile on Jordan Peele. MadTV’s producers wouldn’t let him out of his contract to be on SNL, he says he locked himself in a room & started smoking a lot of weed, plotting his revenge, “like a comic book supervillain.”

-I like this piece about how stressful TV is now because you can now longer just be a viewer; you must be a preacher, a soldier and a campaign strategist to keep your show alive.

-This is a really good recap on what we know about the Jussie Smollett saga. I still think its weird that he agreed to not get back his $10k bond.

-There’s a Sex and the City sequel in the works because Hollywood has no new ideas.

-I did way too well on the quiz about whether it’s a TV ship name or a prescription drug. (Also, I didn’t know that The Walking Dead’s Glenn and Maggie ship name was Gleggie. They deserved better.)

-Barry returns to HBO Sunday and the second season is reportedly even better than the first. I don’t know how that’s possible, but I’ll take it.

-Villanelle escapes the hospital in the final Killing Eve trailer.