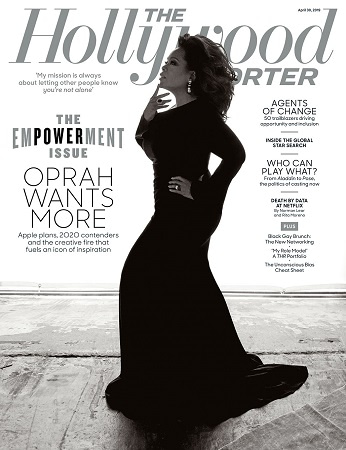 –Oprah Winfrey covers the latest THR and her interview is delicious. She reveals that an annoying fan at an airport convinced her to buy a private plane (“She says, ‘Cause on TV you always giving people hugs. I want a hug.’ So I stood up and I gave her a hug and then I went to the phone and called my lawyer and I said, ‘I’m going to do it, I’m going to get the plane. This is going to be my last time waiting four hours in the Chicago O’Hare Airport'”) and was pretty blunt about her time at 60 Minutes and CBS (“How should I say this? Never a good thing when I have to practice saying my name and have to be told that I have too much emotion in my name…They would say, ‘All right, you need to flatten out your voice, there’s too much emotion in your voice.’ So I was working on pulling myself down and flattening out my personality — which, for me, is actually not such a good thing”). Imagine hiring Oprah and then not letting her be Oprah?!?

-Feast your eyes on Keanu Reeves in the new Saint Laurent campaign.

-It somehow escaped my attention that Moby and Natalie Portman used to date but this excerpt about it from his book is great.

–Jesse Williams‘ messy divorce continues its messiness. He’s asking a judge to deny his ex’s motion that he pay $200k for her legal bills.

-Variety has released some of the salaries Hollywood movie stars will make on their latest projects. Netflix is pushing up the paydays with Ryan Reynolds getting $27M for Six Underground, and Will Smith getting $35M for Bright 2. For studio films, Margot Robbie, Leonardo DiCaprio, Gal Gadot and Brad Pitt are all reportedly raking in upwards of $10 million for their latest flicks.

-It looks like Randall Emmett has finally paid 50 Cent the $1M he was owed because the Instagram posts about it are now deleted, depriving us of the best clapbacks of all time.

-I’m loving all the celebrity guests on this season’s Gay of Thrones. This week’s is Gabrielle Union!

-The Game of Thrones cinematographer is defending the latest episode, telling TMZ “I know it wasn’t too dark because I shot it” and Wired “people don’t know how to tune their TVs properly.” That may be true (and I’ve certainly seen lots of spirited and technical defenses of him), but at a certain point — don’t you have to understand the limitations of the technology that most people are going to consume it on and work around that? If the majority people can’t see the thing they were supposed to see, you pooched it.  Though I still maintain that the editing was worse than the cinematography. Like that scene with Sansa and Tyrion when he raises their clasped hands and kisses hers I went, “Wait, they were holding hands? When did that happen? Show that!” And then they moved from their spot in the crypt and did…something. Did Sansa battle some wights with that dagger? Or did they just reposition?

-Empire was just renewed — but Jussie Smollet‘s future on the show remains in limbo. Said Fox in a statement: “By mutual agreement, the studio has negotiated an extension to Jussie Smollett’s option for season six, but at this time there are no plans for the character of Jamal to return to Empire.”

-Well, this is a very worrying and depressing tweet about Britney Spears from a director.

-When Netflix aired 13 Reasons Why, experts warned that it could to cause an increase in suicides especially among adolescents. A news study finds that’s exactly what happened.

-No gonna lie; Zac Efron’s abs freak me out.

-Better late than never: Megan Fox filed court papers to dismiss her divorce petition from husband Brian Austin Green. She originally filed for divorce in 2015 but they reconciled and had another kid the following year.

-I’m kind of fascinated by how Kareem Abdul-Jabbar ended up writing for the Veronica Mars revival.

-People are really, really upset by how hard last night’s Game of Thrones episode was to actually make out. (I think it was less about the DP lighting scenes poorly, and more a combination of weird, choppy editing and the limits of video compression algorithms and TV technology.) My babies Jamie and Brienne were out there fighting back to back Mr & Mrs Smith-style, so I was happy. I do think that transitioning to Cersei as the big bad might be rough though.

–Maisie Williams‘ boyfriend didn’t care much for Arya’s big moment last night and look I don’t want to judge her personal life, but maybe she can do better.

-Meanwhile, this Twitter exchange between T Pain and the guy who plays Gendry is great.

-I liked this articleon how Avengers: Endgame and Game of Thrones made this weekend feel like a series finale for geek pop culture.

–Halle Berrybroke three ribswhile shooting the new John Wick movie — but was so into it she didn’t notice at first.

–Gabrielle Union and Jessica Alba‘s new show L.A.’s Finest isn’t getting great reviews, but this is a really interesting article about how both stars (who are also producers) and director Lexi Alexanderhad trouble getting respect from male crew members on set.

-Ohhh…Holly Hunter might be in the new season of Succession.

–Matthew Glave and Emily Bett Rickards star in the trailer for Funny Story about a guy who has a one-night stand — and later realizes it was with his daughter’s fiancée. Oopsie!

-I’ve watched Taylor Swift’s new video a trillion times already today because the song is catchy as hell (despite the critics — The Atlantic called it “everything wrong with pop,” Stereogum called it “hollow” and “lazy,” Vulture said it’s “cute but cloying,” and The Independent called it “toothless.”) But what’s the clue she supposedly embedded in the video? Is she engaged?

-Speaking of engagement speculation, Mindy Kaling’s Beyonce audition is very funny but is that a ring we see?!

-Our long national nightmare may finally be over: it looks like Kate Beckinsale and Pete Davidson have split.

-High School Musical actress Monique Coleman recalled the time when Vanessa Hudgens and Zac Efron got into such a bad fight on set that they shut down production for a day.

-This is a fascinating, sprawling conversation with Kristen Stewart and Laura Dern, in which Stewart talks about her sexuality (“It’s easier to have a longer conversation that requires patience, versus f*cking five years ago, when people were demanding that I come out as gay. And I was like, ‘Dude, how do you know? I don’t even know!'”) and Dern reveals how they grew close while filming JT Leroy (“When we had social time, Kristen adopted my teenage son, who is obsessed with her. They became besties. That made it easier. I had a built-in nanny, co-star, love interest — an all-in-one”).

-More and more US outlets are starting to cover the Prince William affair rumours. The latest: The Cut.

-There were lots of very good takes published today on the recent trend of celebrities confusing criticism with personal attacks, including from Variety, Buzzfeed and Slate.

-Oh and Micheal Che is still whining (and confusing Variety with a blog).

-I can only assume that Felicity Huffman is just *thrilled* that pal Vanessa Williams is talking to the press about their post-arrest text exchange.

-Avengers: Endgame is already tearing up all the record books with a $140M-$150M opening day, blasting away Star Wars: Force Awakens’ record first day of $119.1M. This thing is tracking for an opening weekend of at least $315M — and could make $1B worldwide.

-Everyone’s really worried about what’s going to happen in the crypts this weekend on Game of Thrones, but this fan theory is great.

–George and Amal Clooney throw epic pizza parties, according to Adam Sandler, who attended one with Jennifer Aniston when they were shooting in Italy. “They made us homemade pizza. It was an amazing time. I sat next to Bono. It was a great day…Every time I’m with Jennifer something great happens because everybody loves Jennifer and I tend to stay at home and do nothing.” I kind of love that Aniston seemed to get Clooney in the split with Pitt.

-Also, Sandler and Aniston have teamed up again for a Netflix movie. At least it seems like they got a cool paid vacation out of it?