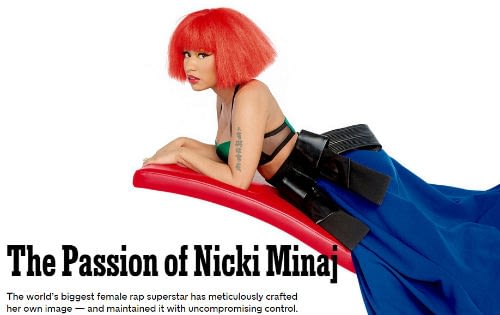 –Nicki Minaj expanded on her “what’s good, Miley?” comment in a New York Times interview, and she did a pretty great job articulating her issues with Cyrus and cultural appropriation. Here’s the best part: “The fact that you feel upset about me speaking on something that affects black women makes me feel like you have some big balls…If you want to enjoy our culture and our lifestyle, bond with us, dance with us, have fun with us, twerk with us, rap with us, then you should also want to know what affects us, what is bothering us, what we feel is unfair to us. You shouldn’t not want to know that.” Also, I’m am now going to follow her lead and end all conversations with, “I don’t care to speak to you anymore.”

-EW’s new reunion issue with the cast of Felicity on the cover gave me all the squees. Does no one age in Hollywood?

–Will Smith reveals just how intense Jared Leto’s Suicide Squad transformation was: “I’ve never actually met Jared Leto. We worked together for six months and we’ve never exchanged a word outside of ‘Action!’ and ‘Cut!’ I literally have not met him yet. So, the first time I see him will be ‘Hey, Jared. What’s up?’ He was all in on the Joker.”

–Jay Leno is cool with diversity, but he doesn’t want to “hit people over the head with it.” That’s right, guys. Best not to hit anyone over the head by existing.

-Congrats to Carey Mulligan and Marcus Mumford, who just welcomed their first child.

-Meanwhile, Meryl Streep is giving me feminist whiplash this week. She says she actually counted up all the film critics on Rotten Tomatoes and now she’s asking “where the women at?“

-My trailer made me do sprawls last night (eff you, sprawls!) and I was feeling pretty good about my abs. And then I saw Kate Hudson’s latest selfie. I need to do more sprawls.

-There are new photos from the Bridget Jones set and I’m weirdly excited about them.

-Speaking of selfies, Gina Rodriguez took a one with Britney Spears.

-Jack White attended his neighborhood’s potluck and the neighbors had no idea who he was.