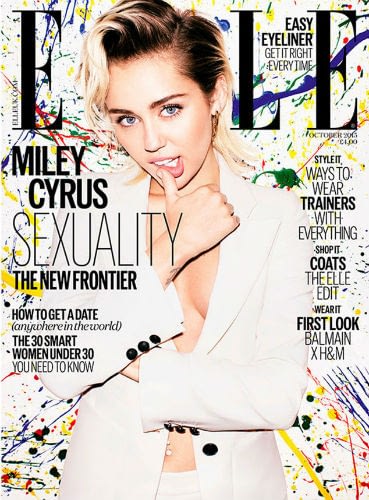 -I don’t know when or how it happened, but I really like Miley Cyrus these days. Like, really. In her NYT article previewing the VMAs, she manages to address the Nicki Minaj question by getting her point across without starting a feud. She also revealed that Seth Rogen wrote her opening skits. I’m actually looking forward to her hosting the VMAs and lemme tell ya, I haven’t used “looking forward to” and “the VMAs” in a sentence together for over a decade.

–Billy Joel sang as Amy Schumer and Jennifer Lawrence danced on his piano at his concert last night. And with that Billy Joel just smashed all of Taylor Swift‘s squad goals…

–Stephen Colbert doesn’t like his Time cover photo. Seeing as the accompanying article was beyond flattering (almost to the point of sycophantic), he might want to reconsider bashing it.

-Remember the time George Clooney got Matt Damon and Bill Murray super drunk before they went on a talk show? Good times!

–Hugh Jackman continues to be a gem of a human being.

-Fear the Walking Dead continues to shatter rating records now that the DVR numbers are in. But…it’s not very good. Just wait until you see this Sunday’s episode. Just you wait.

-The book Scarlett Johansson tried to ban will be published in the U.K.

-Every time I start to get bummed out that every single TV critic I follow on Twitter HATED the X Files clip they showed at the TCAs, I’m just going to look at this photo Mitch Pileggi just posted and pray everything turns out as great as this pic.

-Last week, Lindsay Lohan was in Florence at a wedding and claimed she was roofied. I always, always, always am more apt to believe the woman in these situations, but the fact that she followed it up by running around the villa naked and speaking in a British accent doesn’t help her cause.

-I wanna look like Sarah Jessica Parker when I’m 50. Actually, if I could look like her now, that’d be swell.

-Congrats to Lucy Liu, who just welcomed a son via surrogate.

-This interview with Jordan Peele about ending Key and Peele is great.

–Tom Hardy’s recent DubSmash spree is the best way to close out the week, doncha think? (I *may* have watched this one of him doing 50 Cent more times than is socially acceptable.)

Jennifer Aniston Is the World’s Most Beautiful Person