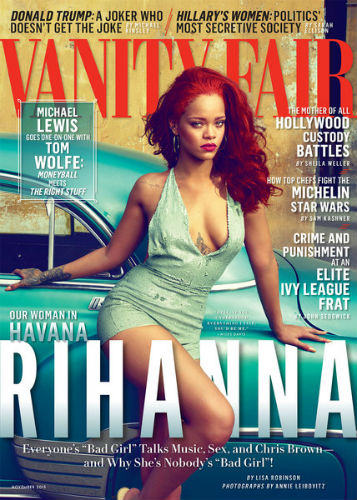 -Why is Rihanna calling Rachel Dolezal “a bit of a hero” in her Vanity Fair cover story? The better part is when she opens up about her feelings for Chris Brown. I don’t hate the way she balances not wanting to discuss it with the knowledge that “it’s not a subject to sweep under the rug, so I can’t just dismiss it like it wasn’t anything, or I don’t take it seriously.”

-Not only was Nicole Kidman reportedly not invited to her daughter’s wedding, apparently she didn’t even know about it.

-So which studio mogul do you think Ashley Judd just accused of sexual harassment? Is it who we think it is?

-Sisters who plan a heist at the MET Gala? Yeah, I’m gonna watch the crap out of this movie.

-Much like everyone else who’s had sex with Tori Spelling, Jason Priestly doesn’t want to talk about it.

-Yay! The audience at the world premiere of the X Files’ season premiere seemed to love it.

-Watch it, Cate Blanchett. Your old is showing.

-I don’t know what’s funnier: that Stephenie Meyer is releasing a gender-swapped Twilight — or if it includes grammatical corrections. (Pffft, who am I kidding? It’s definitely the latter.)

-Man, there is some awesomely subtle shade in this interview with the guy who casts CW shows. I especially loved the Gossip Girl section.

-I love that Tom Hanks‘ hobby is using Twitter to return lost wallets and IDs.

–Victoria Beckham is defending her marriage amid split rumors by saying “David and I have nothing to prove.”

-Every TV critic I follow on Twitter is raving about the first few episodes of Fargo’s second season. Here’s the latest trailer.