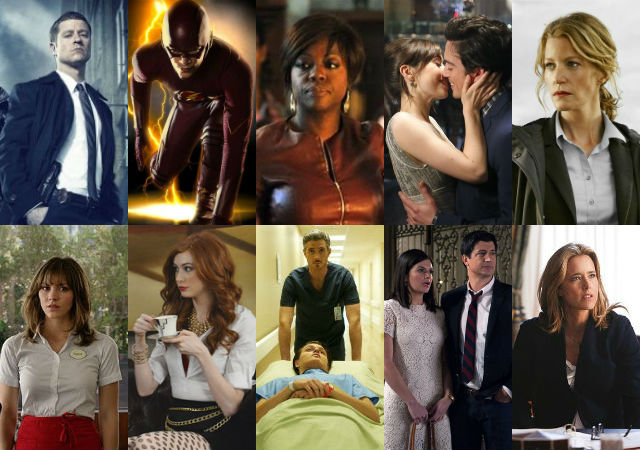 -Here are my picks for the 10 fall shows to watch. (I really wanted to just type “The Flash” ten times, but apparently that’s “lazy writing” or some sh*t.)

-Speaking of TV shows, here’s a new trailer for The Affair, one of the best reviewed new TV shows to come out this fall. No word yet if we’re getting it in Canada (though it stars Joshua Jackson, so it’s our national duty to find a way to watch it regardless). [Update: The Movie Network just announced they’ll air it starting Oct. 12]

-Will George Clooney be a married man come Sept. 12?

-More proof that Charlize Theron and Sean Penn are a match made in grumpy heaven: she says young people have “no fuckin’ concept about wisdom.”

–Justin Bieber is under investigation for attempted robbery at a Dave & Buster’s. It’s terrible and all, but also kind of cute that that’s where he takes Selena Gomez on dates.

-I love that Robin Wright didn’t even try to hide her disdain when she lost at the Emmys last night.

–Sofia Vergara has blasted critics who said her Emmy pedestal moment was sexiest. (Actually, she singled out just one critic in particular, which is bizarre.)

–Aaron Paul’s acceptance speech at the Emmys caused his wife’s “Kind Campaign” website to crash. (It’s back up if you want to check it out.)

-On last night’s red carpet, Kristen Wiig and Sarah Silverman proved that you want them on your trivia team.

-I can never fit Midnight Madness screenings into my film fest schedule, but I’m almost tempted to with What We Do in the Shadows. It looks HILARIOUS.

-This video of Michael Rooker “Grooting” behind Dave Bautista might just be my favourite thing on the internet right now.

-I’ve had this exact conversation about Gilmore Girls many, many times.

-Further proof that Hollywood has run out of ideas: a Full House revival may be in the works.

–Josh Charles makes a big life decision in the new trailer for Bird People. This got raves in Cannes.

-A new Gone Girl teaser debuted during the Emmys, and it’s intense!