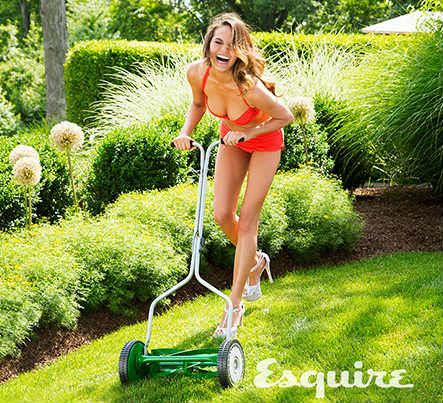 –Chrissy Teigen does some light chores while wearing lingerie in her new Esquire photo shoot, ’cause that totally makes sense.

-Congrats to Christina Ricci, who just welcomed her first child — a baby boy.

-Is George Clooney and Amal Alamuddin‘s wedding really going to be featured in Vogue? That seems so un-George-like.

–Blake Lively and Ryan Reynolds will probably craft each other’s anniversary gifts because god forbid they buy something that isn’t homemade or artisanal.

–Sophia Bush has reportedly dumped that Google programmer for her PD Chicago costar. You’d think she’d have learned her lesson about dating costars by now…

–Jennifer Aniston really wants to lose 5 pounds. Let’s all keep her in our prayers, ok?

–Will Arnett and Jimmy Fallon played Karate Piñata last night, which was as funny as it sounds.

-Here’s video of Channing Tatum backflipping out of a helicopter and ripping his pants off on Running Wild With Bear Grylls. I love nature!

-It’s Friday and we all survived. Let’s celebrate by gazing at Idris Elba’s chest.

–Kim Kardashian is releasing a book of her selfies. That’s it, humanity. We gave it a shot but it’s clearly time to pack it in.

-There’s always money in the banana stand: Arrested Development will return for a 5th season on Netflix.

–Mickey Rourke has stopped messing around with his face and he actually looks like a human again!

-If I was a famous person (unimaginable) and wanted to have a baby (even more unimaginable), I certainly wouldn’t be talking about my baby fever in the press.

-The end of this story about Robert Pattinson makes me want to protect him and feed him carrot sticks. That’s not weird, right?

–Ashton Kutcher’s viral content site is accused of plagiarizing from BuzzFeed, which might mark the first time in history that Buzzfeed’s been on the other side of that claim.

-Vulture has ranked all of the dance sequences in the Step Up movies, from worst to best. Clear my calendar!

-The year of Miles Teller continues. Here’s the new trailer for Whiplash (which killed at Sundance), and the first trailer for Two Night Stand.

-It got mixed reviews at Sundance, but the trailer for Kristen Stewart’s Guantanamo movie Camp X-Ray is solid.