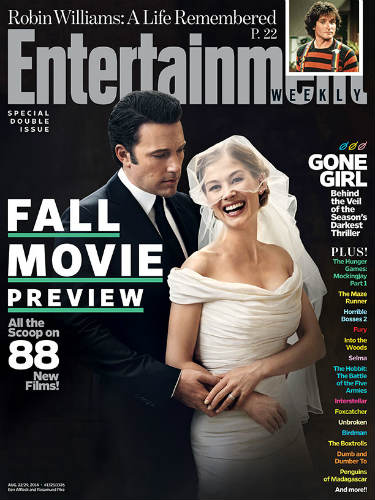 –Ben Affleck and Rosamund Pike are absolutely perfect while in character on EW’s new Gone Girl cover (he looks slightly menacing, while her smile is just a smidge too wide). In the accompanying story, Affleck says the tabloid scrutiny over his relationship with Jennifer Lopez helped his performance: “I knew what it was to be cast in a soap opera I had no control over.”

–Taylor Swift pretended to be a dork on Jimmy Fallon‘s show last night. Not buying it.

-Gawker recently did a great story about Reese Witherspoon, and how sometimes in public she’s Reese, while other times she’s her birth name, Laura Jean. In this video of her dancing at a wedding, she’s most def Laura Jean.

-It’s been a good week for Justin Theroux. Not only did The Leftovers get renewed, but he got to spend it in Bora Bora. I’ll have what he’s having.

–Kendall Jenner claims she was never rude to that waitress in NYC, saying “I was raised better than that.”  Um, she knows we all know who raised her, right?!

-Speaking of the Kardashian clan, I try not to link to photos of celebrities’ kids, but baby North West is a model now, so I guess her privacy isn’t her parent’s top concern.

-Jezebel’s Lindy West did a rewatch of Garden State and the resulting post made me laugh so, so much. Some choice quotes: “Natalie Portman’s character claims to be a human being but is actually a genie that exists entirely within the mind of Zach Braff’s dreaming penis.” Also: “Suddenly, Braff remembers about his headache appointment with Radagast! Oh no! He’s late! He throws the dead cat aside and it miraculously reanimates, validating my long-held and widely ridiculed theory that Zach Braff’s crotch is a pet cemetery.”

-The guy who stole a piece of the car from Paul Walker‘s crash site just got a justifiably hefty jail sentence.

-The cast for Lifetime’s Aaliyah biopic continues to suck. This is supposed to be Missy Elliott? Yikes.

–Tom Hanks just got into the app business.

-I loved this video of supporting character actors petitioning to be action stars.

-Oh, my heart. Robin Williams‘ wife just disclosed he was sober when he died — and in the early stages of Parkinson’s.