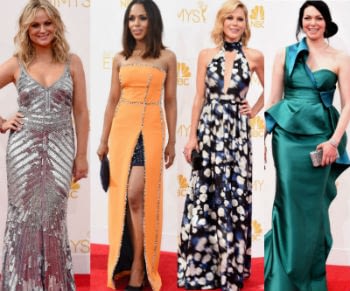 Overall, I was pretty impressed by the Emmy red carpet. Maybe it was because the VMA fashions were so underwhelming, but I loved more Emmy looks than I hated. Of course, there were still some misses. Here are my five favourite and least favourite looks, and check out all the fashions in my MSN gallery.

Amy Poehler: This slinky Theia gown might be Amy’s career best to date. Eat your heart out, Will Arnett!

Julia Louis-Dreyfus: Simple and sleek, the Veep star was the picture of elegance in this Carolina Herrera pink dress (although the cameras made it look red).

Lizzy Caplan: There’s been a lot of chatter about how thin the Masters of Sex star looks lately, but that all disappeared the second she stepped onto the red carpet, looking like a goddess in this black Donna Karan Atelier gown with a flowing white back.

Julie Bowen: This Peter Som dress is pretty, but on her it’s a revelation when you consider all of her past fashion missteps.

Samira Wiley: It was a mixed bag for the Orange Is The New Black stars, but no one did it better than Poussey in this stunning yellow Christian Siriano dress.

Laura Prepon: Was this supposed to be ironic? Seriously, no one puts on this Gustavo Cadile dress and thinks “Yeah, I’m totally nailing it!”

Kerry Washington: I’m glad she was one of the few stars to not wear red, but this orange Prada was…not good. And the sparkly underwear beneath it wasn’t doing her any favours, either.

Mayim Bialik: It’s almost too easy to make fun of The Big Bang Theory’s style, but she was on a bit of a roll the past few red carpets, which makes this matronly look all the more heartbreaking.

Katherine Heigl: As I mentioned in my MSN gallery, this would have been a wonderful dress for someone like Glenn Close or Stockard Channing. But she’s 35! I guess she was trying to look presidential in honour of her new TV show, but this was a fail.

Michelle Monaghan: I’m a big fan of the True Detective star, but why did this Giambattista Valli Couture silk gown have sleeves?

-It looks like Nick Cannon and Mariah Carey aren’t going the amicable “consciously uncoupling” route. He’s letting it be known that he’s the one who left her, and that he’s very worried about the kids because of her “mental state.” If that’s the case, surely there’s a better (and more private) way to go about it?

-My So-Called Life premiered 20 years ago today (god, I’m old!). Here’s what would have happened in season 2.

-So apparently no one else thinks it’s odd that Beyonce is usually so very careful about hiding Blue Ivy‘s face on social media, but she had no problem making her the star of a very calculated PR move last night? Ok, then.

-When Ed Sheeran walked past Miley Cyrus to accept his VMA, she reportedly mouthed the word “asshole.” Dramaz!

-If this video of him feeding her Skittles is any indication, Jennifer Lopez is back together with Casper Smart.

–The Newsroom’s new teaser has landed. I swear to god, if Jeff Daniels wins another Emmy tonight for this crappy show, I might actually flip a table.

-Speaking of the Emmys, Aaron Paul talked about wanting “to do a little something to say thank you” to Breaking Bad fans with his scavenger hunt.

-A small church is preventing you from seeing Game of Thrones’ Cersei‘s boobs.

-Another weekend, another batch of ice bucket challenges. Getting dunked recently were Malin Akerman (who used it as an opportunity to make out with Carla Gugino), Neil Patrick Harris, Jennifer Aniston, Reese Witherspoon and Tina Fey (who let her daughter Alice do it in her place). And god bless Chris Martin for nominating Angelina Jolie, and Matt Damon for nominating George Clooney!

-Here’s where you can read an excerpt from Lena Dunham’s upcoming book.

–Ian Somerhalder and Nikki Reed have reportedly moved in together after only three weeks of dating, which sounds like a totally solid, fool-proof plan.

-I got my TIFF tickets today and I just realized that I’ll be seeing movies with both Kristen Stewart and Robert Pattinson. That was poor planning on my part. (I’m also seeing movies with Bill Murray, Anna Kendrick, Jennifer Garner, Mark Ruffalo, Keira Knightley and Colin Farrell, so I’m hoping those will cleanse the Twihard palette.)

-One movie I couldn’t fit into my schedule was Whiplash, but the new trailer looks great.