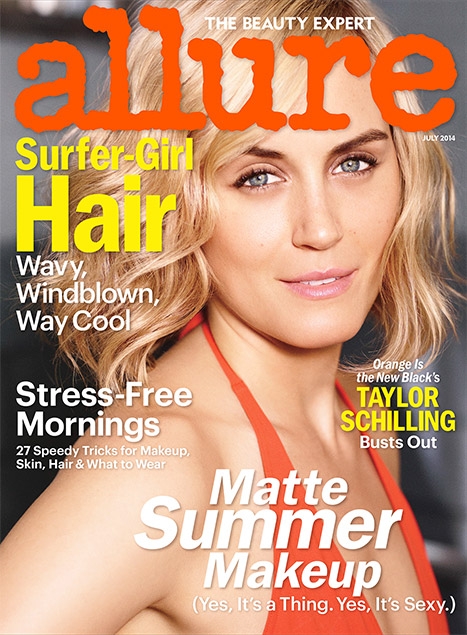 -I really like Taylor Schilling‘s fresh-faced Allure cover. (Sidenote: do you know that when you type her name into Google, “Taylor Schilling’s feet” is one of the first autofills that comes up? What’s that all about, internet?!)

–Anna Kendrick beat Us Weekly to the punch with her “who wore it better?” tweet about Charlize Theron.

–Robert Pattinson has dried his sparkly vampire tears and moved on from Kristen Stewart with a model named Imogen Kerr. She looks like this, so we can all stop feeling sorry for him now.

-Speaking of Kristen Stewart, she’s not happy with Joan Rivers for the comic’s casting couch remarks.

-Have you seen Obvious Child? You should see Obvious Child. I don’t remember the last movie that had me giggling consistently throughout that much. NBC is refusing to air the trailer because it contains the word “abortion,” and Lena Dunham is justifiably pissed.

-Buffy’s Eliza Dushku has split from Rick Fox. For some reason I caught The View today and he was co-hosting. He has the personality of cardboard.

-When I noticed the so-called “perfect” woman (a gross mix of the “best” features of certain female celebrities) had Carrie Underwood‘s hair, I didn’t even bother looking at anything below her forehead because clearly this is bullshit.

-I like to think that Naya Rivera’s topless selfie is in response to all those surfing photos of Lea Michele that are floating around.

-I don’t know what Selena Gomez’s bikini selfie is all about, though.

-If this is how much Kaley Cuoco is talking about babies when she’s not even pregnant, she’s going to be totally insufferable when she actually gets knocked up.

-How did the Queen manage to resist the temptation to sit on the Iron Throne? When it was touring in Toronto, I nearly elbowed someone in the throat just to get a photo of it.

-Congrats to ER’s Noah Wyle, who just got hitched.

–Gary Oldman did an interview and said some really stupid shit. Stick with your incomprehensible phone ads, buddy.

-Here’s the trailer for The Last of Robin Hood, just in case you have a hankering to see Kevin Kline hit on Dakota Fanning. (And if you do, you should get that checked out. It’s not normal.)