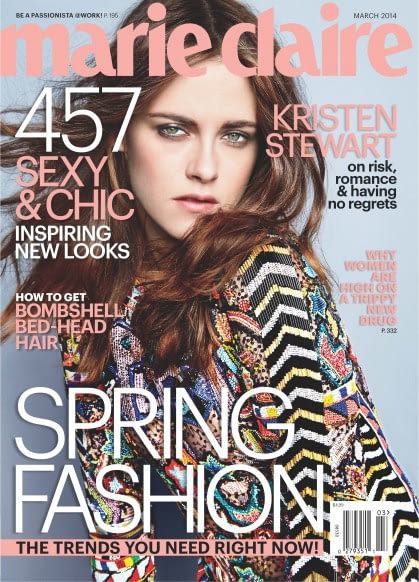 -I’m really liking the styling on Kristen Stewart’s Marie Claire cover. I wish they’d taken advantage of her recent willingness to actually crack a smile every once in a while, but it’s still good.

-Still no official confirmation, but every major outlet is reporting that Ashton Kutcher and Mila Kunis are engaged. She was spotted wearing a giant ring and has posted a few lovely dovey Instagram shots over the last few days.

–Rihanna showed us all her nips again, and then channeled Whitney in The Bodyguard.

–Kim Kardashian ended up leaving the Viennese Ball early after some bizarre incidents — including a guy in blackface approaching her and imitating Kanye. I think this is the part where we’re supposed to feel bad for her.

–Angelina Jolie will wear silver peep-toe shoes to the Oscars, because that’s what she wore to rehearsals and told a bunch of college students who were there that she was trying to break them in. (She also asked them to call her “Angie”!)

-Now that all the Oscar votes are in, is Jared Leto  blowing off his public commitments?

-If you feel bad about how the Oscars shake down this weekend, just know that some of the voters are terrible people.

-The Oscars aren’t until Sunday (I’ll be covering them for MSN.ca — come visit!), but the parties have already begun.

–Philip Seymour Hoffman‘s autopsy results are in. Not surprisingly, he died of an accidental mix of drugs, including coke and heroin.

-Is Robin Thicke trying to save face, or is he serious about his bid to win back Paula Patton?

-Meanwhile, Paula and her son were in a minor fenderbender after being chased by the paps.

-I wasn’t as completely enraptured by Gillian Flynn‘s Gone Girl as some people, but I did love the part where the main character explains the “cool girl” archetype, so I’m glad people are unpacking it. But I’m not really buying this argument that Jennifer Lawrence is trying to be one , mostly because women tend to like her even more than guys, and women see through the “cool girl” schtick really quickly if it’s an act. So Cameron Diaz, your reign remains secure.

–Conan O’Brien was honoured at the Oscar Wilde Awards last night — and it got so loud the cops were called.

-It’s official: Winona Ryder is Benjamin-Buttoning before our eyes. (Also, I love that Helen Mirren is her landlady!)

-A fan grabbed Justin Timberlake’s butt but he was cool with it.

-As a foodie, I loved this oral history of Pastis. As a gossip lover, I loved the section about its celebrity patrons (Matthew McConaughey was “such a bitch,” while Christina Aguilera refused to talk to waiters and delivered her order via bouncer.)

–Colin Farrell on his first meeting with Elizabeth Taylor: “I had less anxiety waiting for the results of a home pregnancy test.”

–Sarah Michelle Gellar did a Reddit AMA and it was great. She revealed that she thinks Buffy’s soulmate is Angel instead of Spike, and that David Boreanaz is a good kisser.

-Veronica Mars star Enrico Colatoni talks about playing a dad on his new TV show: “Every time I say “sweetheart” or “honey”, I can’t stop thinking about Veronica.” Awww!

–Katy Perry surfaced after her split from John Mayer to grab dinner with  B.J. Novak. Free of Mayer AND dining with Ryan Howard? Looks like everything’s coming up roses for her these days.

-The new Muppets movie trailer is a million times better than the last one.