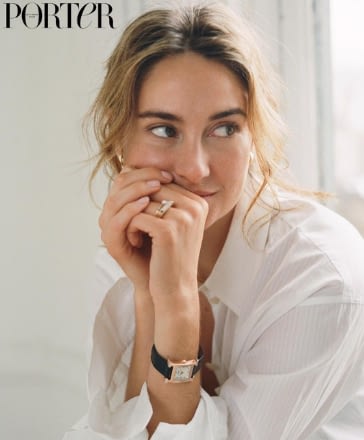 -In her Net-a-Porter cover story, Shailene Woodley hints that the end of her engagement to Aaron Rodgers was the beginning of the “darkest” time of her life. “It was winter in New York, and my personal life was shitty, so it felt like a big pain bubble for eight months.”

-In her upcoming memoir, Pamela Anderson accuses Tim Allen of exposing himself to her on her first day on the Home Improvement set. He has denied it.

-This reminds me that in Alan Rickman‘s recently published diaries, he recalls a moment on the Galaxy Quest set when Sam Rockwell apologized for Allen, saying “I just don’t want you to think American actors are wankers.”

-The family of Julian Sands has released a statement thanking the search teams for their efforts to find the actor, who remains missing after a hiking trip.

-With her Avatar and Avengers credits, Zoe Saldaña just became the first actor to have four movies make more than $2 billion at the box office.

-In an incredibly savvy marketing move, The White Lotus stars (and longtime BFFs) Simona Tabasco and Beatrice Grannò are the faces of the Skims Valentine’s Day campaign.

–Alexander Skarsgård did all he could to promote his naughty new sci-fi horror Infinity Pool at Sundance, including wearing an S&M collar on the red carpet. The movie sounds like sometime I will never watch, but I do love that he brought brought his BFF Jack McBrayer of 30 Rock to the red carpet. Their friendship continues to delight me.

-One of the buzziest titles coming out of Sundance so far is the indie thriller Fair Play, starring Alden Ehrenreich and Phoebe Dynevor as an ambitious couple whose relationship is threatened by a promotion. There was a bidding war and Netflix nabbed it for $20 million.

-There’s also lots of buzz out of Sundance for Flora & Son, the new movie by the guy who did Once starring Bad Sisters’ Eve Hewson.

-On a Sundance panel, Daniel Dae Kim talked about the struggle to tell diverse stories. “One of the collateral damage effects of Crazy Rich Asians was that everyone wanted to do more Asian projects as long as they were just Crazy Rich Asians. If you had a project that spoke to something other than people being super rich and super wealthy and super happy, then they weren’t interested.”

–Kylie Jenner’s lion head is ridiculous, right? Imagine getting stuck behind her at a fashion show.

-She was later spotted wearing a noose necklace, which is even worse.

-I have no idea what’s really going on between Aaron Taylor-Johnson and Joey King, but this video made me laugh.

-The NY police caused a stir after seemingly filming everyone leaving Drake‘s concert in Harlem.

–Drake also had to pause the show after a concertgoer fell from the balcony.

-The full cast is returning for Girls Trip 2, which will see them traveling to Ghana.

-Last night’s episode of Last of Us was devastating. (I assumed the thing that happened was going to based on the marketing, but I’m still bummed.) It was also a ratings winner — up 22% from the series premiere and marking the largest week two ratings increase in HBO history.

–Jennifer Garner is playing Adam Scott’s new love interest in the Party Down revival. She’s no Lizzy Caplan but I’ll take it.

-This weekend’s SNL was such a treat for Parks & Rec fans.

-Outlander author Diana Gabaldon tried to explain Scotland to Scottish people, and it went about as well as you’d expect.

-This is a really devasting look at how close Joseph Kosinski (who’s coming off a huge win with Top Gun Maverick) came to directing Tron 3. It was written and storyboarded, Cillian Murphy was attached, they were close to hiring crew in Vancouver — and then it got scrapped in favor of a Jared Leto version.