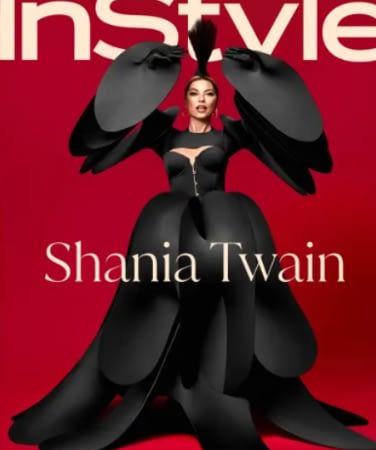 –Shania Twain looks incredible on the cover of Instyle. In the interview, she talks about having throat surgery (“After I had the surgery, I was petrified to make a sound. I didn’t know what was going to come out”), and talks about growing out of being a perfectionist (“I’m just not as worried as I was when I was younger. I’m a professional. I want things to be great. I want to be as perfect as I can be as a professional, but I’m not a perfect person. I sound different. I look different and I’m OK with that”).

–Madonna covers Vanity Fair and talks about motherhood: “Today I am still struggling to understand how to be a mother and do my job. Because, whoever you are, having children and raising them is a work of art. And no one gives you a manual. You have to learn from mistakes. It is a profession that requires a lot of time. And it is exhausting because there is never rest.”

–Robert Pattinson says he’s tried every fad diet under the sun throughout his acting career — including one that was potato-based. “I once ate nothing but potatoes for two weeks, as a detox. Just boiled potatoes and Himalayan pink salt. Apparently it’s a cleanse… you definitely lose weight.”

-He also wore a sparkly skirt at the Dior show.

-While honouring Call Me By Your Name director Luca Guadagnino at the 2023 Sundance Film Festival, Dakota Johnson made a joke about Armie Hammer: “Luca had asked me to play the role of the peach, but our schedules conflicted. Thank God though, because then I would have been another woman that Armie Hammer tried to eat.” 10/10; no notes.

–Taylor Kinney is taking a leave of absence from his role on NBC’s Chicago Fire to deal with a personal matter.

-Netflix announced that Cobra Kai with end with Season 6.

-It’s the 25th anniversary of the Dawson’s Creek premiere, which has generated lots of retrospectives. Someone I follow tweeted about an IG account that’s posting clips of the show with the original music restored, and I have spent a gross amount of time this week re-watching season 3 through IG clips. I have no regrets.

-I’m very curious about what film is going to slide into the 10th spot in the Best Picture Oscar nominations next week. I’m still pulling for Women Talking to take it, but it looks like it might be The Whale.

–Michael J Fox got a standing ovation at Sundance for his new documentary.

-A stuntwoman-in-training tries to prevent her sister from getting married in the trailer for Polite Society, directed by Nida Manzoor, who created We Are Lady Parts.

Beyonce Just Gave An Actual Interview and It Was Awesome