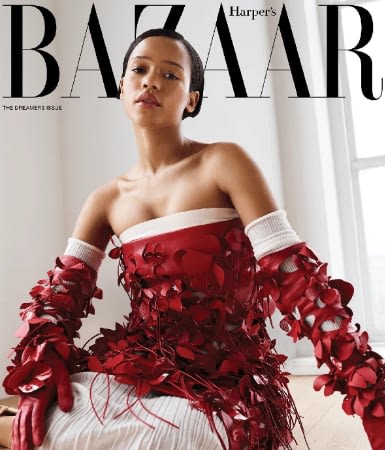 -Bones and All star Taylor Russell is stunning on the cover of Harper’s Bazaar, in which she talks about learning how to play the harp (“I was like, ‘What’s the one instrument that none of my neighbors are going to hate hearing?’”), her early years in North Vancouver (“Most of my memories are playing on the beach: turning over the rocks, finding crabs and seeing them scramble. Catching jellyfish”), moving to Toronto when she was six (“The beauty of Toronto is that, out of Canada, that’s where the culture is. My dad is Jamaican, and we ate Caribbean food, and it felt like that community was very intact, and I liked that”), and her friendship with Euphoria’s Alexa Demie (“Yeah, that’s my family”).

–Alec Baldwin, along with armorer Hannah Gutierrez Reed, will be charged with involuntary manslaughter in the death of Halyna Hutchins on the set of Rust. In a statement, the Santa Fe district attorney office’s special prosecutor called out a “pattern of criminal disregard for safety” on the movie’s set.

–Julia Louis-Dreyfus tells Variety she’s ready to “kick some ass” in the Marvel Cinematic Universe. “I pitched it; I told them I really want to fight. I haven’t seen the script yet — we’ll see if that happens.”

-Is Brad Pitt having money issues? First he sold a majority stake in his production company Plan B, and now he’s selling his Los Feliz home.

-The BAFTA nominations are here, and The Fabelmans shockingly got shut out, managing only one nomination for Original Screenplay.

-That 90s Show, which dropped on Netflix  today, is getting decent reviews.

–Aubrey Plaza shows off her intense impressions in her SNL promo.

-Outlander has been renewed for an eighth and final season consisting of 10 episodes.

-Tron 3 is moving forward at Disney with Jared Leto as its star. I hate everything in that sentence.

-HBO Max has canceled the Gossip Girl reboot after two seasons. Showrunner Joshua Safran says the show is looking for another home but acknowledges it’s a long shot.

–Bryan Cranston and Aaron Paul are reprising their Breaking Bad roles for a Super Bowl commercial.

–Jennifer Lopez‘s new romcom is only 14% fresh on Rotten Tomatoes. Still gonna watch it though.