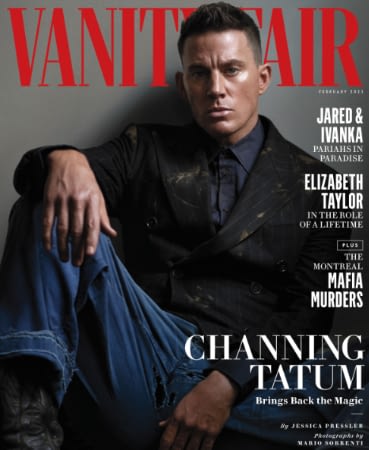 –Jessica Pressler, who wrote one of my fave celeb profiles on Channing Tatum back in 2011, reunites with him again for the new Vanity Fair cover story. The actor talks about his divorce from Jenna Dewan (“We fought for it for a really long time, even though we both sort of knew that we had sort of grown apart”), following fan accounts of now-girlfriend Zoë Kravitz (“I have no chill. I was just seeing what she was up to! Also, I didn’t know anyone would know”), his plans to remake Ghost (“But we’re going to do something different”), and how he’s writing a romance novel with Roxane Gay (“She has almost a roughed-out outline of a story that we both love. We just got to find time to do it. She’s the busiest, she’s way busier than I am”).

-He also did the VF lie detector test, and admitted that he and Sandra Bullock‘s daughters have gotten to “a couple of scraps” at school, which led to him seeing Bullock in the principal’s office.

–Chrissy Teigen and John Legend welcomed their new baby over the weekend.

-The Last of Us premiere delivered strong ratings for HBO, the second biggest premiere in 12 years.

–Jeremy Renner says he’s home from the hospital after his terrifying snow plow accident. Meanwhile, the promo art for the new season of his show Mayor of Kingstown has been changed to remove the wounds on his face.

-Every since I linked to the Paul Mescal GQ video yesterday my YT homepage is all him now. I don’t hate it. Here’s him and his young Aftersun costar trying UK vs Irish snacks.

-In Hollywood, even when you lose you still win. Bob Chapek, who was fired as CEO by Disney last fall, received a pay package worth $24.18 million for 2022 and was set to receive a severance package worth more than $20 million after he was let go.

-Not a headline I was expecting today but ok: “Kristin Chenoweth Says Hair Extensions Saved Her Life When Lighting Equipment Fell on Her Head in 2012″

-I find it interesting that Prince Harry seems a little prickly whenever he’s not getting softball questions, and this is a pretty good rundown about what the media SHOULD be asking him on his press tour. (I’d add a question or two about how he and Meghan seemed ok being part of a racist/colonialist institution until they weren’t welcomed into it with open arms, but ok.)

-The amount of famous people posting their Oscar support about Andrea Riseborough is actually insane. How is this happening? She’s said on the swell of celebrity support: “I think so often what people don’t realize about award season is that very few things are served up. It’s incredible how many things — important stories and wonderful films and brilliant performances — just slip through the net and don’t really have a life. To have your community rally around you in this way is just so wonderful. I think people are relieved to see something shot on film and that is also a character-driven piece.” It’s a more interesting strategy than the usual studio FYC push, and if she gets in over Michelle Williams (who should be in supporting) or Ana de Armas that’s fine, but I’m worried that now there is a chance Danielle Deadwyler or Viola Davis could miss out because of this.

–Adam Pally is an unwanted house guest in the Who Invited Charlie? trailer.