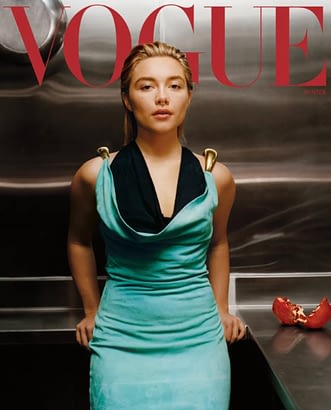 –Florence Pugh covers the latest issue of Vogue Magazine and talks about creating waves in a Valentino sheer dress (“Of course, I don’t want to offend people, but I think my point is: How can my nipples offend you that much?”) and red lipstick (“Accidental reds are really powerful because you can get away with wearing them during the day. And not everyone is like, Oh, wow. It’s a bit like wearing a beret. You really have to nail it”).

-I would watch an entire romcom that’s just Amelia Dimoldenberg and Andrew Garfield‘s interactions on the red carpet. Their GQ Awards interview was good, but they really upped the ante at the Golden Globes: “I don’t think we should explore this.” “Ok, well, I’m not even asking to. You’re the one who’s obsessed with me.” “That’s what I’m saying! I’m scared of what it could turn into. And I’m not ready for that kind of thing.”

–Ezra Miller now plans to plead guilty to a lesser charge in that Vermont burglary case over stolen booze.

–Lisa Marie Presley was rushed to a hospital after EMTs responded to her home for a possible cardiac arrest. She was just at the Golden Globes for Elvis.

–Anna Kendrick hasn’t actually named the bad ex she keeps talking about while promoting Alice Darling, but the internet has (likely) figured it out.

-FX’s John Landgraf always has interesting things to say about the state of television, so this interview is great. “There becomes an amount of content that outstrips your ability to pay close attention.”

-Meanwhile, he delivered his annual Peak TV speech at the TCAs, and said there were 599 adult scripted original series in 2022.

–Paul Mescal, Danielle Deadwyler, Kate Hudson and Diego Calva are among those featured in W Magazine’s 2023 Best Performances Portfolio. (They did Mescal dirty with that outfit, IMO.)

-Speaking of Mescal, this is a lovely interview on playing an anxious young father in Aftersun: “I don’t think there’s anything particularly interesting about watching somebody suffering for 96 or 97 minutes. What I think makes it more effective is when you see them trying not to, and I think Calum really doesn’t want to have the set of feelings that he’s been given. And you see him fronting up against that on a daily basis…It devastates me, you know? It’s like, what is harder to watch than somebody who wants to be better?”

-The Producers Guild just announced their 10 best-film nominees, and this tends to be a really good indicator of where the Oscars go. Interesting to see no love for Women Talking, Babylon, Nope, Aftersun or The Woman King, while The Whale keeps hanging on despite its momentum seeming to have slowed a bit recently. I will say, if this shapes up to be accurate, this will be the first Oscars in recent memory where half of the films have actually been seen by “normal” people. Avatar 2, Top Gun Maverick, Glass Onion and Wakanda Forever are huge, mainstream hits.

–Shakira wrote an angry breakup song, and it’s a bop!

-On the Producer THR Roundtable, Jerry Bruckheimer explains that there was only one cast member in Top Gun: Maverick who didn’t get sick while shooting the aerial sequences — Monica Barbaro.

–Justin Roiland, co-creator and star of popular animated comedy Rick and Morty, has been charged with two counts of felony domestic violence.

-Here’s the trailer for Are You There God? It’s Me, Margaret. It stars Rachel McAdams, Abby Ryder Fortson, and Kathy Bates.

-Pals Reese Witherspoon and Ashton Kutcher swap homes (and hearts?) in Netflix’s Your Place Or Mine.