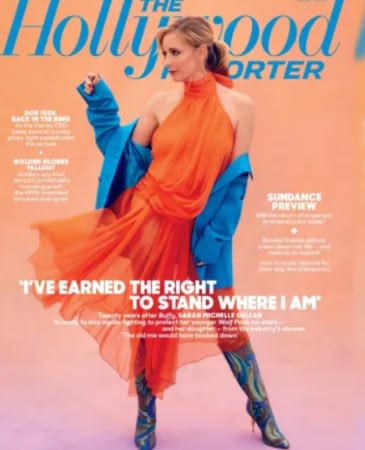 –Sarah Michelle Gellar covers THR to promote her new show Wolf Pack and says she won’t rehash her behind-the-scenes drama with Joss Whedon on the Buffy set (“I’ll never tell my full story because I don’t get anything out of it. I’ve said all I’m going to say because nobody wins. Everybody loses”), discusses the show’s legacy (“I will always be proud of Buffy. I will always be proud of what my castmates did, what I did. Was it an ideal working situation? Absolutely not. But it’s OK to love Buffy for what we created because I think it’s pretty spectacular”), and talks about her daughter wanting to be an actress (“Does it scare the shit out of me? Well, we have rules in place. She can’t be in front of a camera until she graduates high school. She says to me, ‘That’s unfair. You were a child actor.’ Yes, I was. But I was not the child of two famous parents”).

-A M3gan sequel is in the works for next January.

-Did Shakira realize she was being cheated on because of a jar of jam? Who knows, but the memes are fire.

–Cardi B opened up about her on-again, off-again relationship with Offset, and talked about why she stayed quiet amid those cheating rumours: “You know why I was quiet? I was quiet because one thing I’m gonna do, I’m gonna find out the truth…and you know that I was finding out that truth in and out. So it’s like, if I entertain something I know is not true on the internet, people say ‘Oh, it is true because you’re addressing it,’ she explained. “But when I don’t address it, it’s true as well. So I’m not gonna entertain the bullshit because at the end of the day, I know what’s going on in my house.”

–Selena Gomez posted a video from the set of season three of Only Murders in the Building — and Meryl Streep is filming!

-This is a good post from royal reporter Ellie Hall on the things that she was surprised to read in Prince Harry‘s book.

–Anna Kendrick talked about how hard it was to discuss her abusive relationship during the Alice Darling press junket: “People have asked me, ‘Was it challenging to shoot the movie?’ and I guess that question makes sense. But I’m actually finding that the press is the thing that has been a little trickier to navigate, making sure that I’m ok and feeling safe in my body.”

-Netflix announced the dates of a bunch of their 2023 original movies. Some interesting looking ones: Idris Elba returns as Luther in March; Jennifer Lopez plays a female assassin in The Mother in May; Millie Bobby Brown battles a dragon in Damsel in Oct; Emily Blunt and Chris Evans sell prescription drugs in The Pain Hustlers in Oct; Nicole Kidman, Zac Efron, and Joey King star in A Family Affair in Nov; and Julia Roberts, Mahershala Ali and Ethan Hawke are trapped in a blackout in Leave The World Behind in Dec.

-The theme of this year’s Met Gala will be Karl Lagerfeld inspired. Well that’s a choice.

–Austin Butler‘s voice coach says his Elvis drawl may well stick around “forever.”  As someone who watched way too many episodes of The Carrie Diaries, I’m confident that he did not always sound like that.

-I can’t believe we still don’t have a premiere date for Ted Lasso’s third (and maybe final) season. At their TCAs presentation today, Apple only confirmed it would debut this spring.

-Speaking of Apple’s presentation, I’m intrigued by Jennifer Garner’s new limited series. Based on the bestselling novel, The Last Thing He Told Me follows the unexpected relationship between a woman and her stepdaughter (Angourie Rice) in the wake of her husband’s (Nikolaj Coster-Waldau) mysterious disappearance.

George, Julia and Idris Are Among The Stars Gracing Vanity Fair’s Hollywood Issue