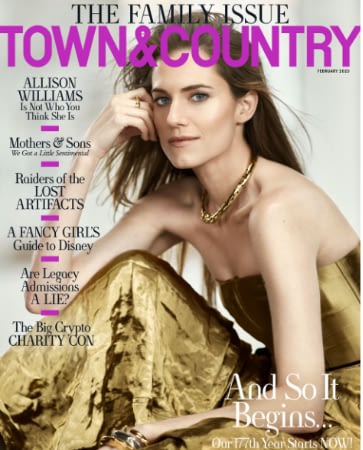 -With her doll horror movie M3gan dropping, Allison Williams is in full promo mode. She covers Town & Country mag and talks about her aversion to social media: “Instagram was just poisonous for me. Some people can do it all, and it doesn’t seem to bother them. For me it was an impossible task.” Meanwhile, Vulture had a stroke of genius by taking her to the American Girl Doll Cafe for their interview.

-Meanwhile, has there been a better movie marketing campaign lately than M3gan? Everything they’re doing is on point.

-I find it weird that Prince Harry finds William’s thinning hairline “alarming” because the whole time I was watching his Netflix docseries I was noticing how similar their hairlines are. I also think it’s weird that he keeps talking about wishing for a reconciliation with his family because, um, he’s made sure that’s not happening. (Don’t get me wrong; I love it. But he burned that bridge and then peed on the ashes.)

-Also, I’ve seen a few tweets saying the physical altercation between the brothers was widely known amongst British journos but never reported on. Gotta wonder why…

-Real Housewives of Salt Lake City star Jen Shah has been sentenced to 6.5 years in prison for wire fraud.

-I love that Simone Ashley was at Florence Pugh’s bday party. They seem like friends I’d want to go for a drink with.

–Adele says she’s suffering from chronic back pain and sciatica, which is affecting her Las Vegas residency.

-No surprise here: Wednesday has been renewed for Season 2 on Netflix.

-It’s one thing for shows to not be renewed, but Hollywood’s new habit of scraping already filmed projects seems especially cruel and wasteful. AMC has pulled the plug on Tatiana Maslany’s new series Invitation to a Bonfire even though four of the six episodes have already been shot. They also announced they won’t air season two of 61st Street — even though the whole season was filmed.

–Ridley Scott’s Gladiator 2 is not exactly the next career move I envisioned for Paul Mescal, but get that money I guess.

-Really wishing Tom Hanks hadn’t waded into the nepo baby discussion if this is his input.

-Meanwhile, someone on Twitter reminded me of the rumours when he produced Big Love and I can’t believe I had totally blocked it out.

-Here’s the latest trailer for Rian Johnson‘s new show Poker Face, starring Natasha Lyonne and a TON of guest stars. It’s kind of funny that they’re positioning this show as an old-school, Murder She Wrote-style procedural with a new mystery every week. Everything about streaming is slowly reverting to the old TV model.