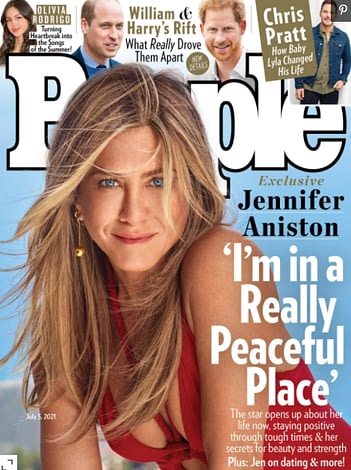 -The Morning Show promo tour is in full swing, with Jennifer Aniston covering the latest issue of People. “I’m in a really peaceful place. I have a job that I love, I have people in my life who are everything to me, and I have beautiful dogs.”

–Aniston also did an interview with Howard Stern, during which she squashed the rumors of tensions between her and Brad Pitt (“Brad and I are buddies; we’re friends”), and insisted nothing romantic ever happened between her and David Schwimmer (“I would proudly say I banged Schwimmer if that happened. But no”).

-Sources tell People that Britney Spears was “very nervous about speaking in front of the judge” yesterday but insisted on doing it because “this is her life and she wants big changes.” Audio of her testimony was posted on Youtube, and despite stammering a bit and talking really fast, she sounded articulate and in control.

-Meanwhile, despite his immense contribution to how she’s been treated, Justin Timberlake tweeted: “Jess and I send our love, and our absolute support to Britney during this time. We hope the courts, and her family make this right and let her live however she wants to live.” Perez Hilton also tried to get in on the action with some empathetic tweets. Look, as someone who has a messy past with celebrity coverage, I get that we’re all reckoning with our role in all of this. Or we’re supposed to be. But these two seemingly having zero self-awareness, instead pretending they didn’t have a hand in what’s happened to her.

-You thought Gigi Hadid’s pasta cabinets were bad? Cara Delevingne opened the doors of her new LA home and showed off her vagina tunnel, ball pit, hat room, Playboy arcade game, David Bowie shrine and the razor scooter she zips around on so the hard floors don’t hurt her feet. “Hugh Hefner is a big inspiration in this house.” I can’t stop watching this video.

-I love this story about a little boy who was sent to the principal because the kept insisting “Superman is my uncle” — and then his uncle Henry Cavill came to pick him up.

-So it sounds like that Deux Moi blind from a couple of weeks ago might have been onto something– according to THR, John Boyega walked off the set of Netflix’s Rebel Ridge mid-shoot due to issues such as the script and his accommodations. Filmmakers reportedly discovered he left when they went to his hotel and found he had checked out. (His agent denies this and says he left due to family issues.) This is so tough because, if true, it’s such a bad look. But Hollywood has a long history of blacklisting black actors with an undeserved “difficult” label, so it’s hard to just accept this story at face value.

–Shia LaBeouf and his ex-wife Mia Goth were spotted arm-in-arm at Disneyland.

–Sharon Stone was not impressed when she asked what it was like to work with Meryl Streep: “You didn’t say, ‘Meryl finally got to work with Sharon Stone.’ Or we finally got to work together…Viola Davis is every bit the actress Meryl Streep is. Emma Thompson. Judy Davis. Olivia Colman. Kate Winslet, for f**k’s sake. But you say Meryl and everybody falls on the floor.”

-Even Rihanna can’t convince me that fuzzy bucket hats should be back in style. Unless your name is Cher Horowitz, I don’t approve.

-The Good Fight’s season five premiere takes a wild stab at recapping 2020. (It premieres today on CBS All Access, and July 1 here in Canada on the W Network).

-Blink-182 frontman Mark Hoppus revealed he has been diagnosed with cancer and is undergoing chemotherapy.

-Mumford and Sons​ lead guitarist and banjoist Winston Marshall recently came under scrutiny for his support of a right-wing provocateur. Now, he’s leaving the band so he can “speak freely” about the “evils of political extremism.” Buh-bye!

–Vin Diesel said he feuded with The Rock to push his acting “where it needed to be,” saying “We had to get there and sometimes, at that time, I could give a lot of tough love. Not Felliniesque, but I would do anything I’d have to do in order to get performances in anything I’m producing.” I don’t know what’s funnier: that Vin Diesel thinks he’s qualified to give acting advise, or that he cited Fellini.

–James McAvoy and Sharon Horgan star as a couple forced to re-evaluate their relationship in lockdown in BBC’s Together. I wanna watch this so badly!

-Netflix puts a new spin on the Old West in the trailer for The Harder They Fall — with a stacked cast that includes Regina King, Jonathan Majors, Idris Elba, Zazie Beetz, LaKeith Stanfield, and Delroy Lindo.