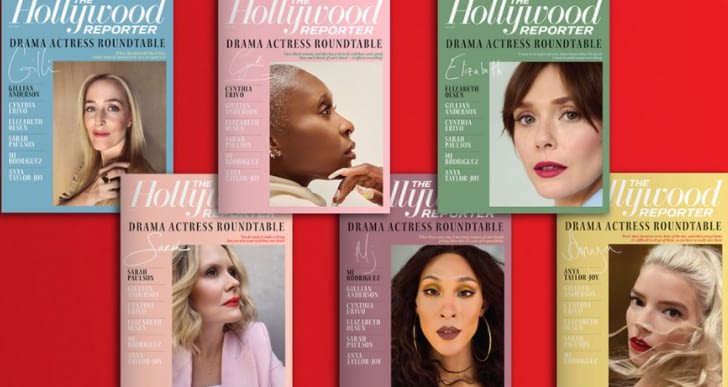 –Gillian Anderson, Anya Taylor-Joy, Cynthia Erivo, Elizabeth Olsen, Mj Rodriquez and Sarah Paulson gathered via Zoom for THR’s TV actress roundtable. They discussed pay, with Anderson talking about being offered a tenth of what David Duchovny was offered for the reboot. “That was the point where I was like, “Fuck this. I’m actually going to talk about this [publicly].” Erivo also discussed salary (“I’m a Black woman. That has a lot to do with how you’re paid, how you’re hired, if you’re hired, the way you’re hired — it affects everything”) and how she still has to ask for Black makeup artists on set. “It isn’t about vanity, it’s about making sure that whoever I’m playing is represented in the right way because they understand how to work with my skin tone and my hair.”

-It’s been a not-great week for Matthew Perry. First there was chatter about his appearance on the reunion, and now comes news that he split from fiancée Molly Hurwitz.

-In her new, self-directed video for “Lost Cause,” Billie Eilish hosts a slumber party for a group of girlfriends.

-Now that Taylor Swift has been cast in a David O. Russell movie, all the terrible stories about him are resurfacing. I can’t believe this guy still gets jobs, let alone any actor wants to work with him. Even George Clooney wanted to hurt him.

-Kim’s Convenience star Simu Liu wrote an explosive Facebook post about how how frustrated he had become with the show’s producers and his fellow cast members. I’m sure all of his complaints are valid, but this is a surprising flex when you’re about to lead a Marvel movie.

-Thor Love and Thunder is done filming, and the photo that they posted makes me want to write Chris Hemsworth a note excusing him from the gym for the next year.

–Ellie Kemper was linked to a white supremacist group after a 22-year-old photo of her surfaced on Twitter but the truth was more complicated — she was crowned Queen of Love and Beauty at an event that had connections to the klan in its early years, but has since become a debutante ball. Still problematic, but less so.

-Never Have I Ever star Maitreyi Ramakrishnan will play Lizzie Bennett in a contemporary rom-com for Netflix that’s “in the spirit of Easy A and 10 Things I Hate About You.” Yes, I’ll take all the Pride and Prejudice adaptations.

–This interview with Patrick Wilson and Vera Farmiga is hilarious. She asks the interviewer over and over if he believes in “spiritual warfare.”

-I work in social media and I don’t believe for a second that Gwyneth Paltrow‘s Goop team posted that photo of Ben Affleck without her knowledge.

–Sophia Bush says she was fetishized on One Tree Hill. “My girlfriends from One Tree Hill and I talk about that all the time. We’re like, girls don’t talk to each other the way we had to talk to each other on that show, and also don’t behave the way we had to behave on that show. Come on! That was, like, some gross older man’s fantasy. And it was icky.”

-Every new trailer for Apple TV’s Physical, starring Rose Byrne, gets me more and more excited.