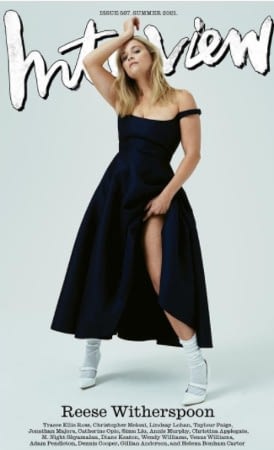 -This is a very non-Reese Witherspoon cover for Interview. She talked to Tracee Ellis Ross for Interview about being a woman in Hollywood (“I had a studio head say to me, “Reese, we already have a movie with a woman this year. We can’t make another one'”) and having conversations about money (“The [thing] that really drives me nuts is that women aren’t encouraged to have conversations about financial literacy. And when things drive me crazy long enough, I feel like I’ve got to go do something about it, and it takes me a while to figure out what to do, but I’ll bring it up to literally everybody who crosses my path. You know me as the ‘How will this make money?’ and ‘Where is the revenue stream?’ girl”).

–Ariana Grande joined James Corden to celebrate the end of lockdowns in New York and California by singing a new version of Hairspray.

–Harry Styles is really pushing into acting, huh? There’s also talk that he’s in the Eternals movie (which may be how Selma Hayek knows him).

-Oh god. Dwayne Johnson is totally going to run for president, isn’t he? “I’m not a politician nor did I ever have political passions, and quite frankly I’m not sure I even have the patience or resignation to deal with the B.S. that comes with politics and politicians, but when 46% of Americans say they’re in favour of me becoming president, that forces me to humbly and respectfully stand up, listen and learn.

-Not surprisingly, new mom Meghan Markle will not be flying to London with Prince Harry for the unveiling of the new Princess Diana statue next month.

-I really liked this conversation between Bowen Yang and Jean Smart for Variety. She told him: “I would like to thank you personally for speaking out against the violence against Asian peoples that has been going on. My daughter is from China. We adopted her when she was 10 months old, and I do worry lately.”

–Paris Jackson says the paparazzi has left her with PTSD: “I experience auditory hallucinations sometimes with camera clicks and severe paranoia and have been going to therapy for a lot of things but that included. I’ll hear a trash bag rustling and flinch in panic. I think it’s standard PTSD.”

-You know there’s too much TV out there when a new trailer drops for season two of Apple TV+’s Truth Be Told, starring Kate Hudson and Octavia Spencer, and it’s the first I’ve heard of this show.