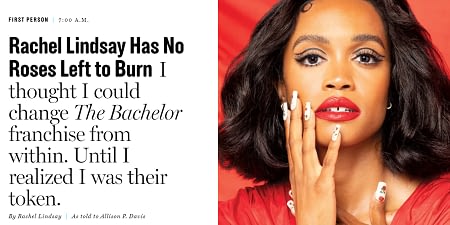 –Rachel Lindsay, the first black Bachelorette, officially ended her contract with Bachelor Nation in April, but now she’s sharing exactly what led to that choice. She delivered a powerful commentary in an essay for Vulture: “The (Bachelor) franchise has spent 19 years cultivating a toxic audience. They have constantly given it a product it wants: a midwestern/southern white, blonde, light-eyed Christian.” She added, “I’m no longer making myself available to The Bachelor universe. To the franchise, I am no longer a figurehead. I am no longer a spot-filler. I am no longer the face of what is diverse.”

-In Variety’s Actors on Actors interview, Elisabeth Moss and Gillian Anderson chatted about spending their 20s on a hit show.

-HBO’s true crime series I’ll Be Gone In The Dark returns tonight with an update episode.

–Megan Thee Stallion slammed DaBaby for collaborating with Tory Lanez. She tweeted, “support me in private and publicly do something different…these industry men are very strange. This situation ain’t no damn “beef” and I really wish people would stop down playing it like it’s some internet shit for likes and retweets.”

–Ariana Grande released an official live rendition of “pov” with Vevo on Monday.

-There will not be a fourth Before movie, says Julie Delpy. I didn’t even know that was a possibility.

–Jimmy Fallon and Lin Manuel Miranda turned 14 iconic musicals into a cameo-packed song about every show they can’t wait to see when Broadway returns. Here’s some behind the scenes footage.

–Nick Cannon is about to welcome his 7th child. He’s had 4 kids within 6 months from 3 different women.

-The new Ted Lasso trailer has arrived. It needs 80% more Roy, but I laughed really hard at “It’s like Dukes of Hazards. Or over here you probably call it Earls of Risk is very funny. Also, “Rom-Communism.”