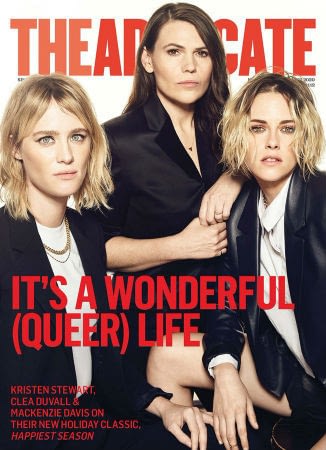 -Happiest Season drops tomorrow on Hulu (available for rent in Canada on Thursday) and I cannot wait! The reviews are glowing and it seems like the type of movie we’ll all end up watching every year and not hating ourselves for it, unlike some others (*cough* The Family Stone *cough*). The leading ladies recently graced the cover of The Advocate.

-Speaking of Happiest Season actors, are Clea Duvall and Josh Hartnett responsible for an entire generation’s sexual awakening? How did I not know this?

–Tristram Shapeero, the director who mocked Lukas Gage‘s apartment in a Zoom audition, has apologized...sort of. It starts off well (“I offer Mr. Gage a sincere and unvarnished apology for my offensive words, my unprofessional behavior during the audition and for not giving him the focus and attention he deserved”) but then it veers into excuses territory (“I was using the word ‘poor’ in the sense of deserving sympathy, as opposed to any economic judgment”). Come on, man. If that was the case, why did he talk about Gage’s “tiny” apartment and how he could see his TV in the background? He should have quit while he was ahead.

-In a new interview with Zane Lowe for Apple Music, Miley Cyrus said she “fell off” her recent sobriety wagon during the pandemic, but she is now two weeks sober. “To me, it was a f— up because I’m not a moderation person, and I don’t think that everyone has to be f—ing sober. I think everyone has to do what is best for them. I don’t have a problem with drinking. I have a problem with the decisions I make once I go past that level of …  I’ve just been wanting to wake up 100 percent, 100 percent of the time.”

–Megan Fox and Machine Gun Kelly have now entered the “regrettable tattoos” phase of their relationship.

–Pete Davidson is set to lead an all-star version of It’s a Wonderful Life. I guess they were going for the anti-Jimmy Stewart.

-The Grammy nominations were announced today and while there were some nice surprises (Megan Thee Stallion should have been a lock for Best New Artist but there was some concern she wouldn’t get it, so I’m glad she did), the snubs are what has everyone talking. The Weeknd got zero nominations (not even “Blinding Lights” in Record of the Year, which makes no sense). The Dixie Chicks were also shut out, and Fiona Apple‘s Fetch the Bolt Cutters didn’t get an Album of the Year nod. It’s all very odd.

–Justin Bieber is not happy about the Grammy nominations either. Oh, he got nominated. He just doesn’t like the category he’s in. This is not a great look for him.

-In other big music news, Taylor Swift announced today that she’ll be dropping an intimate concert film on Disney+ for her latest album, folklore.

-Congrats to Gabourey Sidibe, who just got engaged.

–Mark Ruffalo is only nine years older than Ryan Reynolds, but he’ll be playing his father in a new movie.

-Wonder Woman is officially opening in Canada on Dec 25 theatrically — even though it doesn’t seem like many cities will have open theatres. Swell!

–Michael B. Jordan says he’s going to join OnlyFans and try to raise some money for struggling businesses. “Yea it’s a thing. My barber Joe and the whole team, we’ve been plotting on that so we’re going to work the system.” I very much approve of this plan.

-Peacock’s Saved By The Bell (which airs on W here) is getting surprisingly great reviews.

-I watched the first few episodes of A Suitable Boy, a coming-of-age story set in 1950s India, at TIFF and really liked it. But Netflix is facing a boycott in India because of a kissing scene between an interfaith couple at a temple, and two Netflix execs have been booked.

-There’s talk of a Slings & Arrows prequel? I’m so in.

-I tried to watch the Gilmore Girls revival on the CW last night but it was worse than I remembered. They’re so mean! Were they always that mean? In any case, in a new interview Scott Patterson says he and Lauren Graham both had to quit smoking to survive Gilmore Girls’ rapid-pace dialogue

–Julia Louis-Dreyfus and Veep cast are reuniting to do a table read for “Mother”, their episode on vote recounts, to help get out the vote for the Georgia runoff elections in January.

-I have no interest in reading Ready Player Two, but this thread from a guy who’s working his way through it is gold.

-It’s equal parts hilarious and sad that it took a cover of the Goo Goo Dolls‘ “Iris” for Phoebe Bridgers and Maggie Rogers to each earn their first Hot 100 hit.

–Alicia Silverstone makes a mess of her brother’s wedding in the trailer for Sister of the Groom.