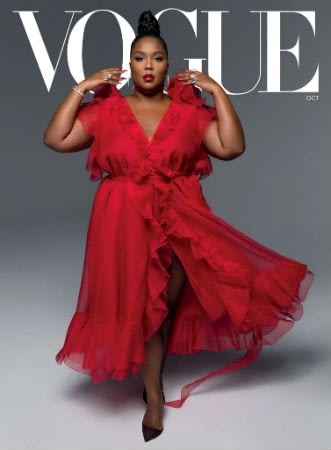 –Lizzo is on the October cover of Vogue, photographed by Hype Williams and looking stunning in Valentino.

–Jennifer Lopez and Maluma‘s new music video is like a mini movie that feels like a gender-swapped Out of Sight, and I’m here for it!

-It was a big day for baby announcements. Billie Lourd surprised everyone by announcing that she and her fiancé, Austen Rydell, have welcomed a son named Kingston Fisher Lourd Rydell. Meanwhile, Supergirl star Melissa Benoist and hubby Chris Wood announced that they welcomed a son named Huxley Robert Wood “a few weeks ago.”

-Also, the royal family announced Princess Eugenie is expecting a baby in early 2021.

-Oh god, Vin Diesel is trying to be a singer now. He debuted his first single “Feel Like I Do” on Kelly Clarkson‘s show. It sounds exactly like you’d expect it to.

–Dax Shepard admitted on his podcast today that after 16 years sober, he relapsed and began taking Vicodin following a motorcycle accident earlier this year. He said for eight weeks he’d been “on them all day,” and it wasn’t until last week that he told wife Kristen Bell and podcast cohost Monica Padman and asked for help.

-Disney+ is leaning hard into the Marvel well. They just announced a new series with Samuel L. Jacksonas Nick Fury.

-I love that outlets are refusing to coverTory Lanez‘s new album after what he did to Megan Thee Stallion. Unfortunately, that didn’t stop him from reaching No. 1 on Apple Music.

-Speaking of reviews, I’m bummed that Chris Rock‘s season of Fargo is not faring well with critics.

The Michael Bay-produced film Songbird is one of the productions cited for not following covid procedures in this terrifying THR article.

-I don’t understand Kanye West’s screening room. It looks like an airplane hanger.

-I usually like Alyssa Rosenberg‘s pop culture takes but this piece on why there’s never been a better time to read J.K. Rowling‘s books is not it. I think what she’s trying to say is that her latest novel is not as transphobic as the press has made it out to be and we should all read it and judge for ourselves, but even having a killer who dresses up in women’s clothing perpetuates a gross trope, whether he identifies as trans or not. And knowing what Rowling has said publicly (even just this week!) does not want to make me give her the benefit of the doubt or contribute to her already full coffers.

–Aldis Hodge is in talks to play Hawkman in the Black Adam movie starring Dwayne Johnson. I recently saw Hodge in One Night in Miami and he’s so, so good.

-The Best Supporting Actress chatter is surprising me. Ellen Burstyn was good in Pieces of a Woman, but that’s unexpected.

-Netflix has released the trailer for its new fantasy film A Babysitter’s Guide to Monster Hunting.