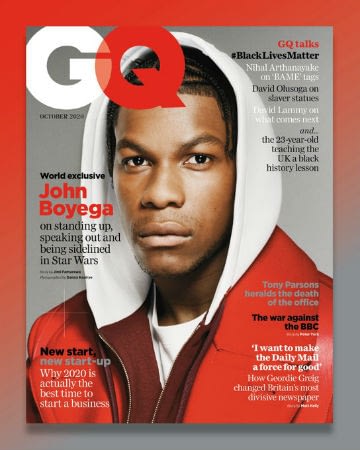 -My god, this John Boyega interview in British GQ is a thrilling read. He speaks frankly about his Star Wars experience, particularly The Last Jedi: “What I would say to Disney is do not bring out a Black character, market them to be much more important in the franchise than they are and then have them pushed to the side. It’s not good. I’ll say it straight up…Like, you guys knew what to do with Daisy Ridley, you knew what to do with Adam Driver. You knew what to do with these other people, but when it came to Kelly Marie Tran, when it came to John Boyega, you know fuck all. So what do you want me to say? What they want you to say is, ‘I enjoyed being a part of it. It was a great experience…’ Nah, nah, nah. I’ll take that deal when it’s a great experience. They gave all the nuance to Adam Driver, all the nuance to Daisy Ridley. Let’s be honest. Daisy knows this. Adam knows this. Everybody knows. I’m not exposing anything.”

-It’s wild to me that some people are criticizing him for this interview and “biting the hand that feeds him.” Disney is increasingly consolidating the entire movie industry and is a multi-billion-dollar media monopoly. They don’t need Twitter fanboys to defend them.

–Two more women have come forward with allegations that comedian Chris D’Elia exposed himself to them.

-A new take on Pretty Little Liars is in the works from the showrunner of Riverdale. No one needs this right now.

–Prince Harry and Meghan Markle just signed a massive multi-year deal with Netflix, where they will be producing films and shows aimed at “inspiring hope.”

-Mulan star Yifei Liu once owned 30 cats. I have so many questions.

–Cardi B has come a long way since getting into a fight with Nicki Minaj at a fashion party. She just became the new face of Balenciaga.

-Part of me wants to cheer when celebs like Padma Lakshmi post bikini pics to celebrate turning 50, but part of mean thinks this is really damaging.

-The Venice Film Festival opened with a rallying cry in defense of the moviegoing experience in the face of threats posed by streaming giants.

-Why in the world is the CW  trying to rename the Arrowverse the CWverse? Nah.

–Britney Spears is denying comments that she keeps posting the same selfies over and over, saying “well you know us girls …… it’s the same top and same hair but if you look at the details it’s a completely different picture.”  But — and I think this question applies to her entire social media presence — why?!

-There are new photos of Kristen Stewart and Mackenzie Davis in their upcoming gay holiday romcom and I need this movie so much.

-Scientology is reportedly tightening its reins even tighter with celeb followers. How fun for them.

-While promoting her new beauty line, Selena Gomez opened up about her mental health troubles. “I’ve tried a ton of different things, but the one thing I’ve never stopped doing is asking for help. That was the hardest part, but I truly believe that that’s why I’m stronger.”

-Here’s the trailer for Emily in Paris, a new series from Sex and the City creator Darren Star that stars Lily Collins.