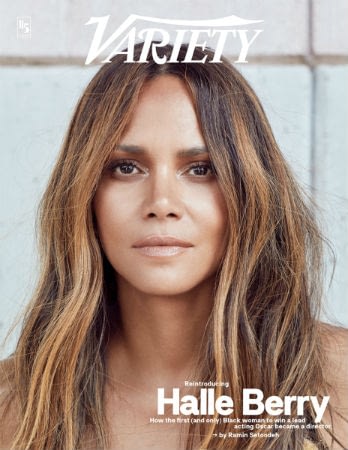 –Halle Berry is getting lots of buzz for her directorial debut Bruised, in which she plays a mixed martial arts fighter. In her new Variety cover story, she talks about seeing warning signs while shooting Catwoman (“The story didn’t feel quite right. I remember having that argument: ‘Why can’t Catwoman save the world like Batman and Superman do? Why is she just saving women from a face cream that cracks their face off?'”) and her fights with Bryan Singer on the X-Men set (“Bryan’s not the easiest dude to work with…I would sometimes be very angry with him. I got into a few fights with him, said a few cuss words out of sheer frustration. When I work, I’m serious about that. And when that gets compromised, I get a little nutty”).

-Good on Niecy Nash for securing a photo deal with People for her wedding pics. In the interview she said of marrying Jessica Betts: “I don’t feel like my marriage is my coming out of anywhere, but rather a going into myself and being honest about who I love. And I’m not limiting myself on what that love is supposed to look like.” She added, “I was not suppressing my sexuality my whole life. I love who I love. At one point in my life, I married twice and I love those people. And today I love this person. I’ve done everything I wanted to do on my own terms and my own way. So my choice now in a partner has nothing to do with who I’ve always been.”

-This is old news for anyone who follows DeuxMoi’s stories on IG, but Katie Holmes’ new man was recently engaged — and he reportedly blindsided his fiancée with a breakup text when photos emerged of him kissing Holmes.

-Star Trek: Discovery actor Anthony Rapp and another man filed a lawsuit yesterday against Kevin Spacey, accusing him of sexual assaults in the 1980s when they were teens.

-I gave up on The 100 after its first season but man, after seeing why it was trending last night, I’m not sure I’ve ever heard of another showrunner with more contempt for fans (he’s right up there with Veronica Mars’ Rob Thomas). To pull a move like that with a fan favourite, to make another fan favourite be responsible, and to do it when there’s just a few episodes left of the series? That’s not edgy or daring, that’s just burning the show’s legacy.

-Because Drake can do whatever he wants, he hosted Steph Curry for private shootout at his home court in his Bridle Path mansion.

–Dame Diana Rigg, who starred in the original The Avengers and is best known to today’s audiences as Lady Olenna on Game of Thrones, died on Thursday at age 82.

-One of the TIFF movies I’m most looking forward to watching (in my living room) is Regina King‘s directorial debut One Night In Miami. The reviews are outstanding.

–Mandy Patinkin shared some memories on Twitter about shooting The Princess Bride.

-Watching Jane Fonda explaining to Joy Behar why she shouldn’t complain about the term “defund the police” is glorious.

–Neve Campbell has officially signed on for the Scream reboot.