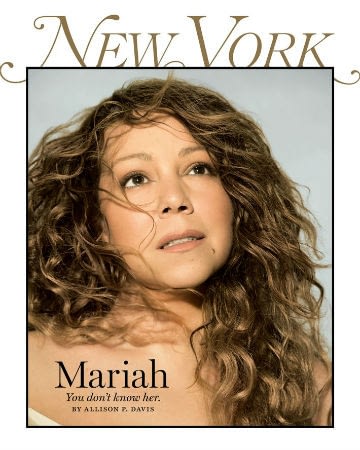 -In a new interview with New York Magazine, Mariah Carey reveals “My All” and “The Roof” were about her brief fling with Derek Jeter, talks about how ex Eminem doesn’t make it into her memoir (“If somebody or something didn’t pertain to the actual meaning of Mariah Carey, as is the title, then they aren’t in the book”), and recalls that infamous moment when Ellen Degeneres forced her to reveal her pregnancy before she was ready and she miscarried soon after (“I was extremely uncomfortable with that moment is all I can say. And I really have had a hard time grappling with the aftermath”). My fave bit is when she chides an assistant for putting out candles during the interview (“Oh, darling. Don’t put that down there for me, because that is hideous. That is underlighting!”)

-Singer-songwriter Ed Sheeran announced that he and his wife Cherry Seaborn had welcomed a baby girl last week named Lyra Antarctica Seaborn Sheeran. “We are on cloud nine over here. I’ll see you when it’s time to come back.”

-Meanwhile, I knew Michael B Jordan’s tribute to Boseman was going to gut me, and it did.

–Trevor Noah and Friday Night Lights actress Minka Kelly are dating, and a source tells People “it’s very serious.” I can see them together.

-Wow. I can’t handle horror, plus I’m not going to the movies again anytime this century but I was hoping Antebellum would get good reviews for Janelle Monáe‘s sake. That is not happening.

-Speaking of not being able to imagine being in a movie theatre, it’s wild to me that the Venice Film Festival kicks off this week and stars have started to arrive.

–Lana Condor and Noah Centineo, who are doing reshoots for the third To All The Boys movie in Vancouver, were spotted heading to dinner together yesterday. Good mask usage!

-In case you missed it, here’s Marie Claire’s fascinating profile from April on how Marisol Nichols went from an actress to an undercover child predator hunter.

-The Brandy vs. Monica battle last night was all anyone on my Twitter TL could talk about.

-I am definitely here for the Megan Fox comeback.

-The Friday Night Lights cast shot a voting PSA and reminded everyone that Grandma Saracen is the best.

-I’m a big fan of the rose from Brad Pitt‘s Chateau Miravel, so yeah I’ll try his bubbles.

-In The Doorman, Ruby Rose plays an ex-soldier who befriends a family in NYC and ends up defending them against a gang of thieves.