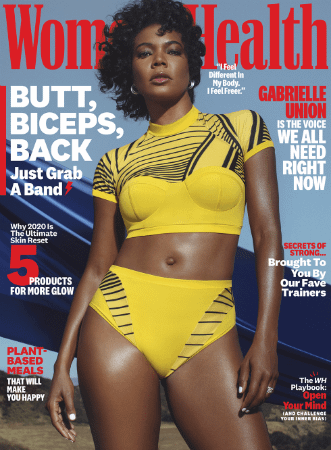 –Gabrielle Union says of her new Women’s Health cover: “My 1st cover shot by a Black woman @djenebaaduayom and the 1st time I’ve worn my own natural hair for a cover.” In the story, she says: “The combination of the pandemic and this racial reckoning, alongside being inundated with [images of] the brutalization of Black bodies, has sent my PTSD into overdrive. There’s just terror in my body.”

-Even the Caped Crusader can’t escape the pandemic. Robert Pattinson has tested positive for the coronavirus, shutting down production of The Batman in London. What’s makes this even more brutal is the reason they first shut down production back in March is because a crew member died of complications from covid.

–Dwayne “The Rock” Johnson also revealed that his entire family is recuperating from “relentless” covid. He says his children only had sore throats but he and his wife “had a rough go.” Pattinson is likely in the best shape of his life with all the Batman training and The Rock is, well, The Rock and they still got it.

–Miley Cyrus says she had to deal with sexist remarks from a VMAs producer when she asked for the beauty lights to be turned off for her performance.  “The beauty light is always used on women and I said turn the f——g lights off. You would never tell Travis Scott or Adam Levine that he couldn’t turn the beauty light off.” But then when her bracelet kept getting caught in wires she was told “You want to be treated like a guy? We wouldn’t be dealing with this if a guy was doing it.”

–Meghan Markle is suing the paparazzi over photos taken on a walk with Baby Archie and her dog on Vancouver Island.

–E. Alex Jung profiles are always spectacular, even when they’re featuring someone as divisive as Miranda July.  I mean, any article that details an evening in which July, Margaret Qualley, and Taylor Swift commiserate about Pete Davidson is worth your time.

–July certainly had strong praise for the article.

-Speaking of excellent profiles, this one on Jesse Plemons makes you realize how steadily he’s been working in critically acclaimed projects since Friday Night Lights (he’s appeared in 4 Best Picture nominees over the last 5 years and leads Charlie Kaufman’s latest).

-I thought this was an interesting take on how Tenet might need movie theaters more than movie theaters need Tenet: “It holds your interest through entropy alone, and it’s easy to imagine how the slightest distraction might cause the whole thing to sputter apart…Which, sadly, isn’t to suggest that ‘you have to see Tenet on the big screen’ so much as it is to say that the film might not work at all on a small one.”

-The first reviews for Mulan are in and they are very positive, though many critics are noting that its grandeur would work better on the big screen than on its Disney+ release.

-Meanwhile, this is a great thread of Asian writers who’ve reviewed Mulan.

–Tilda Swinton was honored at the opening night of the Venice Film Festival and paid tribute to her Marvel costar Chadwick Boseman.

-Also, Cate Blanchett’s cape on the Venice red carpet was everything.

–Lili Reinhart says she feels like a prisoner in Canada, where she’s filming Riverdale. We’ll gladly send her back.

–Ethan Hawke wrote a book review for the New York Times, and it’s made him even more crush-worthy.

-I’m glad I bought tickets to Nomadland at TIFF before I read this story about Frances McDormand pooping in a bucket during filming.

-The trailer for Netflix’s Grand Army looks great, but when it dropped yesterday a writer from the show tweeted: “Me and the 3 writers of color who worked on the show quit due to racist exploitation and abuse. The show runner and creator went full Karen and called Netflix hr on the Black writer in the room for getting a haircut. Yes you read that correctly. Who wants to interview us?”

-I can’t imagine being in the theatre again by November, but the new No Time To Die trailer is gorgeous.