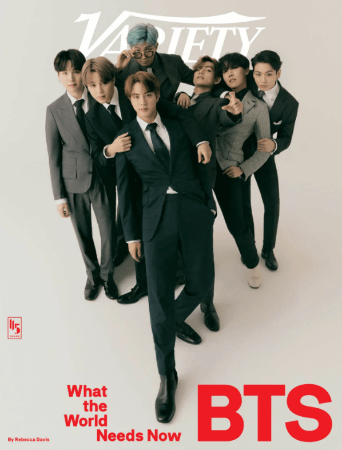 –BTS hit another mainstream milestone by covering Variety’s Grammy issue. There’s also a cute behind the scenes video from the shoot.

-I’m pretty sure all the Tracee Ellis Ross and Harry Styles dating rumours came about just because they had good chemistry together on a talk show once (mostly because Tracee was trying to pick up the slack from the other guest — Kendall Jenner), but I don’t hate it.

-The MCU has found its Ms. Marvel: Markham, Ont native Iman Vellani. The 18-year-old will star in the new Disney+ series.

–Angelina Jolie reportedly insisted Brad Pitt quarantine for two-weeks after returning from their Chateau in France with Nicole Poturalski. Oh, so she asked him to do what he’s actually required to after international travel? What a monster.

-Everyone who got bad vibes from Max Ehrich when he was engaged to Demi Lovato seems justified these days. He posted IG messages implying Lovato was being abused and added “I’ll be posting on here for updates every few hours with pics… In case people try to ‘Jeffrey Epstein’ me.”

–Tony Lanez’s team allegedly sent several emails to media outlets pretending to be members of Megan Thee Stallion’s record label, 300 Entertainment, in order to “campaign press” on his behalf. The email contained doctored texts and a link to a report that claimed that Megan did not want to testify against Lanez about her shooting. In a statement, Megan’s lawyer said, “We have been made aware of manipulated text messages and invented email accounts that have been disseminated to the media in a calculated attempt to peddle a false narrative”

-I don’t believe anything from this website, but I really really don’t believe in an Enola Holmes spinoff starring Henry Cavill. The movie was fine but he was so very miscast. When has Sherlock Holmes ever been a hunky, empathetic hero?

-Production has paused on Riverdale and Supergirl due to a shortage of COVID-19 testing capacity in Vancouver. “This is a situation we are continuing to monitor hour by hour and day by day,” one studios said.

–Ethan Hawke is getting raves for his performance in the new miniseries The Good Lord Bird.