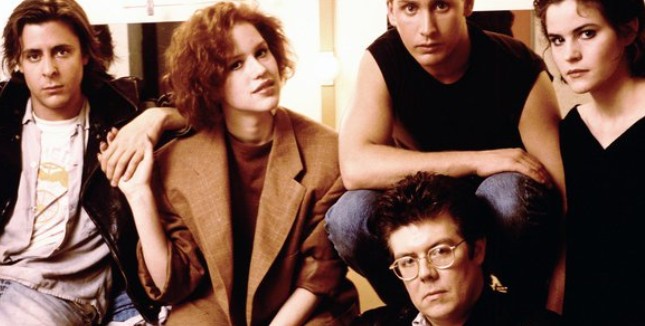 –Molly Ringwald revisits the movies of her youth in the age of #MeToo in this New Yorker essay. I love John Hughes movies and The Breakfast Club in particular, but what she says about Bender’s behaviour strikes a cord.

-Also, Cardi B is not going to tell you if she’s pregnant or not. “Certain things about me have to be private. You can not invade my privacy, I’m not a damn animal at the zoo where you just could see everything. No!”

-This side by side video comparison of Alan Cummings‘ new show Instinct and Bones is insane. Yes, procedurals are very formulaic and are going to have a lot of similarities, but the video that slices the two shows together is very damning. Incredibly specific plots and exact lines of dialogue are repeated. Instinct showrunner Michael Rauch went on Twitter to apologize for the similarities, and also reached out to Bones creator Hart Hanson.

-Do you know how hard it is to climb a rope without using your feet, let alone when you’re 68? You go, William H Macy!

-I adored this EW list of the best seasons of 70 TV shows.

-Expect John Krasinski‘s A Quiet Place to do really well at the box office . This thing might actually win the weekend!

-Also, John fanboying over Stephen King’s praise of the movie is very cute.

-Busy Philipps wants you to know that when she posted that photo of BFF Michelle Williams, she wasn’t exploiting Michelle’s relationship with Heath Ledger.

–Carrie Coon talks about having a baby and working with Spielberg in a new Rolling Stone interview. I heart her.

-I watched last night’s Atlanta before I went to bed. That was a mistake. (Also, this is a good explainer on that WTF ending.)

-Do you think Will Smith has opened up Instagram to A-listers? Because it feels like as soon as he joined, other big names followed.

–Norman Reedus says his Walking Dead costar Andrew Lincoln punches everyone in the face. (Also, his regular speaking voice is kind of high and it’s freaking me out!)

-Netflix rarely cancels anything, but they just cancelled Everything Sucks.

–The First Purge trailer is here and no thank you.