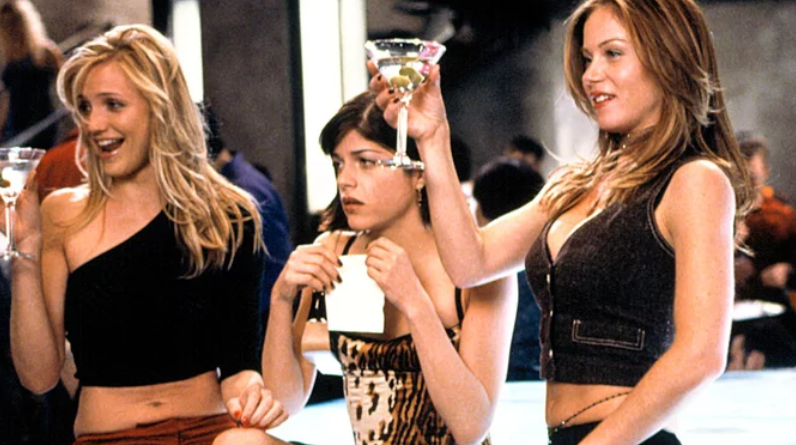 -I’m still waiting for my reunions issue of EW to arrive (I just know I’m gonna be stuck with the Dawson cover), but they’ve released a bunch of awesome articles online. The cast of The Sweetest Thing remember the film (and Cameron Diaz confirms that she’s retired from acting),  Keanu Reeves and Alex Winter reunited and say there’s a Bill & Ted comeback in the works, and Anthony Edwards talks about feeling like he’s watching his son when he looks back at Fast Times at Ridgemont High. My fave is the article on the ER episode where Lucy and Carter were stabbed  which really took me back. (I’m also impressed that Noah Wylie addressed the rumours that he was a bit of dick on that set).

-Also, this is a very cute clip of the Dawson’s Creek cast trying to remember the lyrics to “I Don’t Want to Wait.”

–Will Ferrell and Joaquin Phoenix interviewed each other, and the article made me laugh out loud multiple times. My fave exchange: “FERRELL: I was recently thinking about your role in Gladiator , which is a big studio movie.  PHOENIX: Are you reading off prepared questions and trying to pretend that they’re just popping into your head?  FERRELL: Maybe wait to hear what I have to say: I was thinking about your role in that movie, and the reason why it works is because you’re such a little bitch.” This is also perfect: “FERRELL: Well, next year I’ll invite you over to watch the Super Bowl. PHOENIX: You don’t have to. FERRELL: You don’t even have to watch it. PHOENIX: I’m trying to do this thing where I’m being honest with people — I don’t want to come.”

–Cynthia Nixon is kicking off her gubernatorial campaign with a pit stop on Wendy Williams’ talk show, which is super smart.

–Seth Rogen told Ellen that he knew about Stormy Daniels and Trump ages ago. “I’ve known Stormy Daniels a long time…It didn’t really occur to me that it would come out or anyone would care about it, but then when I saw it I was like, Oh yeah, Stormy told us all about that.”

-**Stefan voice**  This Elizabeth Hurley tweet has everything: an inappropriate pose with an underage family member, a stabbing, “oozing blood,” a criminal at large.

-This article on what happened to Ricky Gervais’ comedy over the last few years is so, so good.

-Page Six says Sanaa Lathan was the actress who bit Beyoncé. They report that multiple sources identified the Love & Basketball star as the person behind the famous bite, though Lathan has denied that she was the culprit.

-Never thought I’d type this, but here we go: actress Kristin Kreuk has denied any involvement in her Smallville costar’s sex cult.

–Lindsay Lohan shared a series of videos on her Instagram story in which she claimed to have been asked to give an upcoming commencement address at Harvard Law School. And it seems like it was an April Fool’s prank, which might actually be the saddest thing I’ve heard all year.

-The CW renewed 10 of its current series, which Crazy Ex-Girlfriend and Jane the Virgin returning for their final seasons. They’ve yet to renew iZombie and The 100 yet because their current seasons just started and are about to start respectively, while there’s no news on likely-to-be-canceled newcomers Valor and Life Sentence. One good thing: Deadline reports that the network is expected to play with the sizes of the orders more than ever next season, especially around the DC shows. Both Arrow and The Flash could definitely benefit from less than 23 episodes.

-The grand total to-date for the Roseanne revival to a stunning 29.4 million viewers — more than the Oscars. I still have no interest.

–Kumail Nanjiani and Billy Eichner got into a Twitter debate with Sarah Silverman over her support for the show.

-It sounds like Fox’s New Mutants is a mess. Not a good sign when the studio brings on 12 writers to fix the script — and  not one of them is a woman.

-It’s great that Jessica Jones’ showrunner recognizes that “there aren’t enough women of color in meaningful roles” but she’s two seasons in now. What’s the plan to fix it?

-Why is Meek Mill’s judge not being forced to recuse herself? This is nuts.

–Chris Brown tried to defend himself after a photo circulated of his hands around a woman’s neck.

-I haven’t watched Grey’s Anatomy in ages but all the Twitter talk about Scott Speedman’s episode had me tuning in. SWOON!

–Sterling K. Brown‘s appearance on Brooklyn Nine-Nine was a delight.