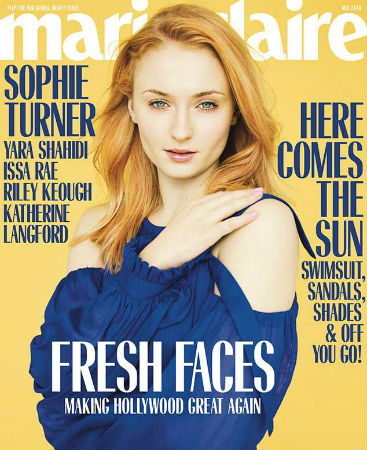 -Marie Claire’s 2018 Fresh Faces covers feature Issa Rae, Riley Keough, Sophie Turner, Yara Shahidi and Katherine Langford. (I want all of their lipsticks. ) In her interview, Turner opens up about how her engagement to Joe Jonas has been treated like some sort of accomplishment. “It’s lovely to be engaged. Not like I achieved anything, but I found my person, like I’d find a house that I love and want to stay in forever. There’s a sense of peace that comes with finding your person. But there’s a drive that comes with your career.”

–Tristan Thompson has reportedly been cheating on Khloe Kardashian since November, according to Us Magazine.

-Meanwhile, Wendy Williams felt the need to get some stuff off her chest: “The only person I feel bad for is the baby. I don’t feel bad for Khloe. Khloe, you knew when you pulled up on him that he had a girlfriend named Jordy Craig and Jordy was 5 months pregnant.”

–George Clooney is reducing his role in Hulu’s Catch 22 to focus more on directing and producing. But it’s not all bad news –Kyle Chandler will take over the starring role in the six-episode miniseries.

–Will Ferrell was hospitalized after a car side-swiped the SUV he was riding in and caused it to flip over. He was released from the hospital and didn’t suffer any significant injury.

–Britney Spears showed up at the GLAAD Media Awards and “everybody lost their minds.”

-I tried to watch On My Block because critics are loving it, but couldn’t get into it. Still, I’m super happy that Netflix renewed it for a second season.

–Kanye West is writing a book on society’s obsession with photographs. Kay.

-After their totally terrible response in last week’s episode, The Simpsons showrunner vows to find the “right” answer to the Apu controversy. A little late, no?

–Lily James says she cried when she met Meryl Streep: “It was like, ‘Hold it together, Lily!’ It was too much.”

-This chart that determines how a male author would describe you is perfection.

–Taylor Swift covered Earth, Wind, & Fire’s soul classic “September” and I love that everyone on my Twitter TL made the “Oh hell no, Karen. Keep your bland ass potato salad to yourself” joke…

-I’m going to NYC this weekend but hope to catch some of the Youtube Coachella stream.  Since I don’t go anymore, “Couch”ella has been a good time the last couple of years.

-All eyes are on Elastigirl in the new trailer for The Incredibles 2.