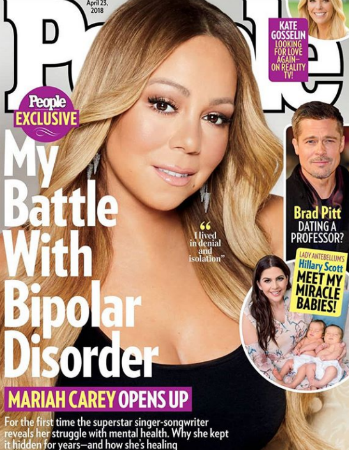 -In her People cover story, Mariah Carey revealed she was diagnosed with bipolar disorder in 2001. “For a long time I thought I had a severe sleep disorder. But it wasn’t normal insomnia and I wasn’t lying awake counting sheep. I was working and working and working…I was irritable and in constant fear of letting people down. It turns out that I was experiencing a form of mania.” Good on her for opening up and starting conversations about mental health.

-Congrats to Rachel McAdams, who just welcomed her first child — a boy.

-Fandango reports that Avengers: Infinity War is on course to presell more tickets than any other superhero title in history, supplanting Black Panther. Its presales are outpacing last seven Marvel movies COMBINED.

-This behind-the-scenes video from the movie set is very cute.

-Meanwhile, Vulture ranks which of the 33 characters are most likely to die in the movie. (I think the second-from-the-last person they list is pretty much a sure thing, no?)

–Patti LuPone was not a fan of Uma Thurman’s Broadway debut. “I don’t necessarily need to see film actors on stage. Can I just say…Uma Thurman in The Parisian Woman, anybody seen it? [Raising her eyes and speaking slowly] Holy shit! I’m sorry, I’m sorry.”

-Kylie Bunbury got engaged to Jon-Ryan Alan Riggins. Mark-Paul Gosselaar‘s comment on her IG post is perfect. (I love that they seem to miss Pitch as much as I do.)

-Cleveland Cavaliers player Tristan Thompson was caught on camera making out with two women while his girlfriend Khloe Kardashian is due to give birth to their child any day now.

-The guy who plays Jax on Legends of Tomorrow is out here showing his ass on Twitter.

–Amy Schumer says Jennifer Lawrence introduced her to Adele — and the singer almost officiated her wedding. “I’d never met her before. We hung out a little bit that week, and then we were just real drunk one night, and we were talking about how we wanted to get married, and Adele was like, ‘Well, I can marry you.’ And we were like, ‘OK, cool.’ We were making a whole plan…and then the next day, she was like, ‘Hey, we’re not really, like, friends.'”

-I don’t care what everyone else believes, Hugh Jackman‘s anniversary message to his wife is super sweet.

–Jake Gyllenhaal is insisting he won’t be the new Batman. Wait, was that a possibility?!

–Kevin Smith offered an ailing Stan Lee an invitation to move in with him.

–Aisha Tyler directed a new movie called Axis, which I saw and really liked. It’s out now on streaming platforms.

-Not surprisingly, Netflix is pulling out of Cannes completely.

-I really liked this article on Drake and Cardi B’s recent samplings of Lauren Hill.

–Paul Rudd and Steve Coogan play a couple who unexpectedly end up taking in a kid in the Ideal Home trailer. The movie had be at “play a couple.”