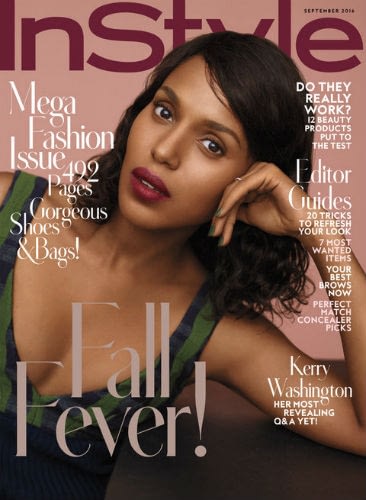 -I really want to fix that wispy bit of Kerry Washington‘s bangs on the cover of Instyle. And maybe hand her some concealer. Also, I stopped reading the story when I got to the part about her being friends with Jessica Alba. Let’s all just repress this sad cover and hope some magazine will eventually step up and do her right, mm-kay?

-Here’s the real story behind Beyonce’s “Becky with the good hair” — and it’s pretty boring. Let’s just go ahead and repress that too!

The same day Sarah Jessica Parker‘s “I am not a feminist” cover story lands, President Obama wrote a piece for Glamour on being a feminist and his daughters. “It’s important that their dad is a feminist, because now that’s what they expect of all men.” God, I love him.

–Jason Momoa and Henry Cavill are giving me a broverdose and I’m here for it.

–Adele’s credit card getting declined at H&M is making me feel better about my life.

–Renee Zellweger has written an op-ed directed at Owen Gleiberman and tabloid journalism following the ridiculous scrutiny surrounding her face. It’s wildly overwritten (“choosing the dignity of silence rather than engaging with the commerce of cruel fiction”), but I like the she basically comes out and straight up denies messing with her face. Except…the wording is a bit off, no? “Not that it’s anyone’s business, but I did not make a decision to alter my face and have surgery on my eyes.” If this is the stance she wants to take (and frankly, as someone who is pretty sure she’s going to make Botox her bitch in a few years, I’m not judging either way), why not be more blunt? “I didn’t do it” is not exactly the same as “I did not make the decision” to do it.

-What the hell is happening on the next season of Girls?!

–Hugh Grant once had so many massages he went insane. Celebs: they’re just like us!

-No one loves their cat as much as Kate McKinnon loves her cat.

–Drake‘s dates with Rihanna sound like something out of a terrible rom-com and I am living for it!

-The FTC is cracking down on celebs who whore out their Instagram feeds, saying hashtags like #ad aren’t enough.

–Natalie “I don’t even own a TV” Portman has deigned to grace the small screen with her presence on an HBO miniseries from Friends co-creator Marta Kauffman.

-Muse asks the important question: How the hell did that Kevin Spacey cat movie get made?

-The plan to move the Divergent franchise to TV continues to sound messier and messier the more details are revealed. Now it sounds a lot more like a TV show than a TV movie – likely with none of the original movie’s big stars.

–Christopher Nolan‘s new film Dunkirk is a war movie — which is pretty much the only thing revealed in the first teaser.

Leslie Jones Is Going to the Olympics!