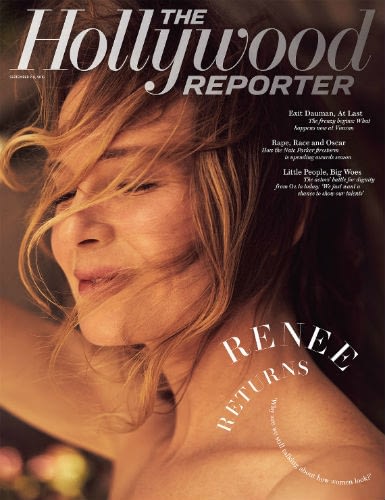 -This is a good profile on Renee Zellweger. It’s one thing for a paparazzi-baiting celeb like Jennifer Aniston to complain about the scrutiny surrounding her, but it’s more powerful when it comes from someone who self-exiled themselves from the spotlight for six years. I especially liked this part: “This conversation perpetuates the problem. Why are we talking about how women look? Why do we value beauty over contribution? We don’t seem to value beauty over contribution for men. It’s simply not a conversation.”

-On the flip side, Gabrielle Carteris is petitioning to keep ages off IMDB, saying that she wouldn’t have been Andrea on 90210 if a casting director could find her real age online. I’m not sure lying about aging is going to help with gender inequality.

–Jennifer Lopez and Casper Smart have split — about four years after we all expected them to.

–Leslie Jones’ personal website was hacked and nude photos, passport, and passwords were posted online. This is bullshit. What was her crime? Starring in a summer movie while being a black female? Paul Feig has spoken out against it; I really hope her GB costars get vocal soon too.

-This preview of Britney Spears’ Carpool Karaoke edition has me worried. James Corden has said that they tape these things for hours, and this is the best they could edit down to 30 seconds? Her pretending to sing and not getting his jokes? Ooh boy.

-Unlike his Mr Robot character, Rami Malek can’t code or type, but he did manage to post his first Instagram selfie with Stephen Colbert’s help.

-The Affair costars Joshua Jackson and Ruth Wilson went to a restaurant together — for 8 hours! No judgement. If I were her, I’d extend that meal as long as possible too. (“You’re cool if I order a fourth entree, right?”)

–Bella Thorne is one of those people who I can never, ever place (even though I’ve watched The Duff an embarrassing amount of times. Like, a mortifying amount). But now that she’s come out as bi weeks after splitting with her bf and now may be dating her brother’s ex-girlfriend, I guess I should start paying attention.

-Oh, and the next day it’s announced that she is executive producing a Lifetime TV movie. Got it.

–John Krasinski says he might’ve played Captain America if he wasn’t so intimidated by the swole Chris Hemsworth.

-“I don’t assume that people know who I am.” Beck, reminding us why we love him.

-Look, I like Michael Strahan just fine. He seems like a nice guy and I think my mom has a crush on him. But the way ABC keeps going all in with him confuses me. He just sold a script to them about a former football star who joins the Miami police force. Like, a drama script!

–Courteney Cox ran wild with Bear Grylls and discussed her divorce from David Arquette, her “brutal” temporary split from Johnny McDaid and her plastic surgery regrets.

–Taylor Swift and Tom Hiddleston had a fight? Heavens!

-Not sure we need to know that Naya Rivera got an abortion during her day off from Glee, but here we are.

-I love that Keira Knightley revealed that she’s been wearing wigs for years. I feel like 90% of female celebrities are wearing other people’s hair, while we spiral in hair envy about them.

-I could listen to Kevin Bacon talk about feminist theory forever.

-Whenever I see a Victoria Beckham dress design that I love, I get so confused/surprised.