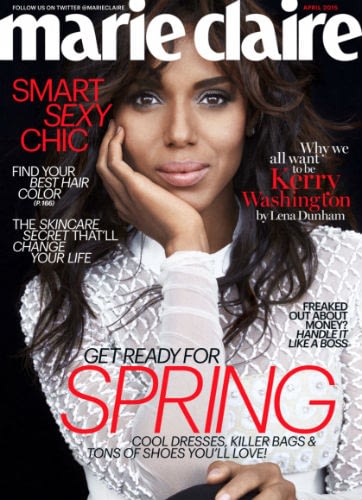 –Kerry Washington‘s Marie Claire cover is a stunner and such a good bounce back from that InStyle mess. In the issue, she’s interviewed by Lena Dunham and they chat about her daughter, maintaining privacy and going through “fashion boot camp.”

–Lena says she’s been on a fitness kick because her “really hot” parents make her look like “a bag of trash” next to them.

-Everything’s coming up Hanks today: he lost his credit card on a NYC street and a guy named Tony returned it.

-It looks like Alexa Chung and Alexander Skarsgard are still a thing. Do they have a portmanteau yet? Cause I vote for Alex².

–Rihanna looked like a muppet on GMA this morning. Even she doesn’t have the power to bring back stir-up pants (I hope).

-Has a show ever imploded as quickly or publicly as Fashion Police? Kathy Griffin quit last night after just seven episodes, releasing a lengthy statement saying “I do not want to use my comedy to contribute to a culture of unattainable perfectionism and intolerance towards difference.” She then sent an email to friends saying she is “scared” and asking for their public support — which she’s getting. Though some are speculating that she left because of the Zendaya debacle, there are rumours suggesting that’s not the case.

-Buzzfeed continues to examine the important issues, like what the hell was with all the waffles on Gossip Girl?!

–Lil Wayne threw his mic and stormed off the stage in the middle of a performance after a DJ played the wrong song, ’cause that’s how adults process things.

-I don’t know if I’d want to stay at Reese Witherspoon’s hotel. I’d probably feel pressure to make my own bed so she wouldn’t judge me.

-Are we allowed to talk about Unbreakable Kimmy Schmidt yet? Have y’all had enough time to binge? It’s super uneven but funny, and the Titus character steals the show. He had both my favourite one-liner of the entire season (“I first moved here, they were doing an all-black production of Oklahoma! called Alabama!”) and my favourite bit (featuring Breaking Bad’s Dean Norris).

-If anyone can help end this town’s Footloose ban, it’s Kevin Bacon.

–Mary Elizabeth Winstead, Derek Luke and Chris Messina are in a movie together? Sign me up. (It still saddens me that she’s in A&E’s remake of The Returned. Just watch the original. Subtitles are your friend.)