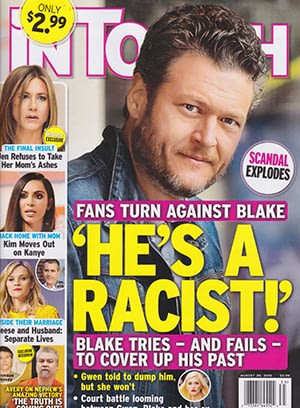 –Blake Shelton went on the defensive after some terrible tweets he posted in 2009 and 2011 resurfaced earlier this week, blaming his inappropriate sense of humour. The Voice is also in damage control mode, reportedly asking outlets to not cover it in exchange for continued access to the show. Yes, blackmail should totally help this situation.

-Now Justin Beiber and Selena Gomez are taking their TMI to Snapchat. Goodie.

-THR has the scoop on what really went down between Dwayne Johnson and Vin Diesel:  On Aug. 8, Johnson was ready to shoot one of his final scenes with Diesel on Fast 8, and Diesel was in his trailer keeping everyone waiting. But an onset source says “this was how Vin has run things for the past several movies” and everyone’s been pretty much resigned to it, so Johnson’s public rant “blindsided” everyone.

-Us Weekly Claims Tom Cruise has had “essentially no contact” with Suri for about three years. If true, that’s incredibly sad. I wonder if the church has deemed her and/or Katie SPs?

-Meanwhile, Katie and Jamie Foxx were spotted backstage at a Barbra Streisand concert.

–Amber Heard‘s lawyers retracted that statement claiming she’s “vindicated” in the court of opinion. (They’re not wrong, tho.)

-Meanwhile, Billy Bob Thorton would like to erase himself from the narrative.

–Renee Zellweger denied a magazine claim that she talked to penguins — and then the writer denied her denial. Journalism!

–Diana Ross took out a full-page ad congratulating her daughter Tracee on her Emmy nom, which is all kinds of sweet.

-Stepbrothers costars Will Ferrell and John C Reilly will reunite for a new Sherlock Holmes comedy.

-THR’s cover story with Oprah and Ava DuVernay on their push for inclusion instead of diversity is so smart and thoughtful. This quote from O is basically the 100 emoji: “I realized that the best way to show that black people are just like everybody else, or that gay people are just like everybody else, is not to do a show about gay people or black fathers raising their children [but] just to include them in a story about raising children. That’s how you normalize it and make it OK for everybody else.”

–Joshua Jackson and Diane Kruger were photographed hanging out and now my brain/heart hurts. Also, he smokes? You’re killing me, Pacey!

-This is a fascinating article about the questionable donors to Leonardo Dicaprio‘s charity. He has “a notable habit of buddying up with smooth dudes who end up in federal prison.”

–Taylor Swift flew Tom Hiddleston to Rhode Island on her private jet for a reunion — but she also gave $1 million to help Louisiana flood victims so she pretty much gets a pass on everything from me this week.

-Now that Hulu has lost the rights to all of CW’s superhero shows, they decided to make their own, tapping the creators of Gossip Girl for an adaptation of Marvels’ Runaways.

-Now it sounds like The Flash and Supergirl will come together for TWO musical crossover episodes this season. This makes me nervous. Both of those shows still have to find their footing before getting all stunt-y.

-There’s more talk about how the studio is going to market Birth of a Nation in the face of the Nate Parker controversy. No one is giving him a pass.

–Jonah Hill shot down rumours that he feuded on set with Miles Teller while shooting War Dogs.

–Chris Pratt should promote every magazine he’s in exactly like this.

–Amy Schumer tweeted that she is “disappointed” in writer Kurt Metzger after his comments on a rape scandal, and he no longer works for her. Wait, she’s JUST NOW disappointed? Because he’s been pulling this crap for years.

–Cynthia Nixon plays Emily Dickinson in the trailer for A Quiet Passion, which is coming to TIFF.