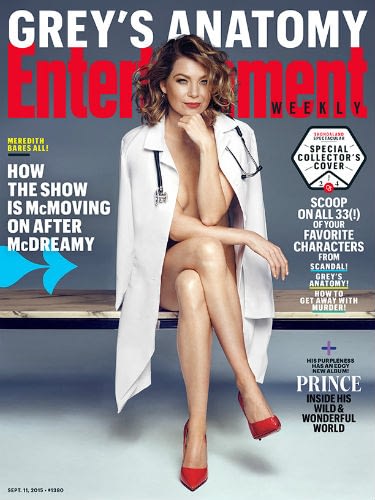 -EW published 4 different #TGIT covers (the best is Shonda Rhimes with her leading ladies, but $10 says the one with Ellen Pompeo will end up in by mailbox. Why does she have to be so nekkid?! How am I supposed to carry this in public? I still haven’t de-blushed from reading this issue on the subway.).

-Even more interesting than the covers/quotes is this gallery from behind the scenes of the photo shoot. I spent a lot of time creepin’ those pics and studying everyone’s interactions.

–Taylor Swift’s camp wants to make it clear that she was not caught on camera doing coke backstage at the VMAs, she was merely blowing her nose. Not only does the video prove it, but it also proves what an INSANE production it is whenever she needs to use a tissue. Seriously, was the human shield necessary?!

-In her Glamour cover story, Anne Hathaway talks about how she’s already losing roles to younger actresses. She’s 32. I hate the world.

-According to Kate Hudson’s Instagram, she’s trying to convince Jennifer Aniston to join the network. God, can you imagine what her feed would look like? I’m picturing a lot of inspirational quotes about yelling at the ocean.

-I take CDAN blind items with a huge grain of salt (less a grain, more a salt mine), but even if this one turns out to be totally made up, it made me laugh and laugh and laugh…

-Congrats to Tom Hardy and his wife Charlotte, who are expecting their second kidlet.

-Also, Tom brought his dog to the Legend premiere and it’s making me feel things.

-Who goes to Benihana, falls into the goddamn grill, and then BLAMES BENIHANA? Tori Spelling, that’s who.

-Did Sandra Bullock‘s new boyfriend break up with his 23-year-old GF to date her?

–Gillian Anderson tweeted a photo from the last day of The X Files’ shoot in Vancouver. (She’s heading to Toronto this weekend. I’m going to try not to make an ass of myself when I meet her. I will undoubtedly fail.)

-It doesn’t matter how good you thought she looked, Cindy Crawford says that unretouched photo of her that went viral “was stolen and malicious.”

-Weird. Mark Ruffalo says the Hulk will not be in the next Captain America movie.

–Lana Del Rey is walking back that comment about feminism being “not an interesting concept.” Kind of.

-This is a great followup to that article I linked to earlier this week about how Netflix is killing the binge watching pattern they made famous. Netflix, Amazon, HBO et al prioritizing quantity over quality is not exactly promising for the future of TV. Sometimes network executive intervention is needed to keep a show on track. For every TV auteur with a singular vision like Mr Robot’s Sam Esmail, there’s the flip side like True Detective’s Nic Pizzolatto. (And, let’s face it, as much as I adore Mr Robot, it still isn’t perfect.) Maybe collaboration and network notes aren’t always a bad thing?

-I already filled this year’s quirky/weirdo TIFF film quota with Men & Chicken (because nothing has made me laugh harder in a long time than this trailer), but an equally bizarro looking TIFF offering is The Lobster, starring Colin Farrell as a man who has forty-five days to find love or else he will be turned into an animal. I think I’m going to love this.

Selma Blair Is a Survivor