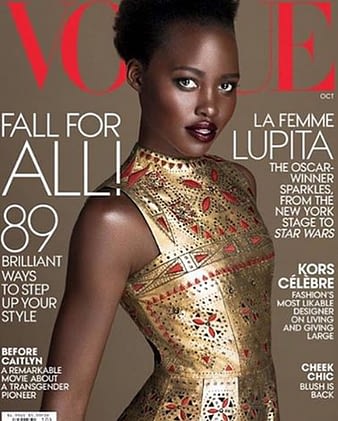 –Lupita Nyong’o on the cover of the October Vogue is giving me life! That black fan skirt is art.

-If you’ve been reading this blog for any length of time, you know that I have a strong, abiding love for Stephen Amell. Like, huge. But he screwed up on social media yesterday, and then proceeded to make it worse. I saw the first tweet and thought “um, what?” The next tweets about profiling and peoplebeing offended just because they’re bored led to some serious face-palming. By the time he was only replying to white dudes and posting a victimized, non-apology video that would have made Matt Damon blush, I was curled up into a ball and whimpering “Why, Captain? Whyyyyy????” Look, no one’s doubting that’s he’s probably a good guy and he’s done a ton for charities, but he has failed this internet.

-Oh, and his “I’m taking a break from social media” thing lasted all of a 1/2 a day. Still didn’t apologize or back away from the sentiments but admitted to a “lapse of judgement” and said “shit happens.” Ok.

–James Franco has a new movie column, because he clearly doesn’t have enough to do.

-Pro tip: don’t get Amy Schumer a subscription to Women’s Health. “I did an interview with them, it’s in the magazine right now. …[they asked] ‘What do you think women can do to better their confidence?’ I was like, ‘Don’t read your magazine.'”

-Pour one out for Alicia Vikander and Michael Fassbender.

-This as an interesting article about how a lot of the queer/trans movies premiering at TIFF this year are really about straight people.

-Welp. Grantland just called the new crop of TV shows the worst fall season in modern television history. “This is the sorriest collection of recycled ideas, neutered groupthink, and depressing mediocrity I’ve ever seen. You have to understand: I’m not just saying nothing is good. I’m also saying nothing is even the slightest bit compelling. Or interesting. Or unique.”

-The new Mockingjay Part 2 trailer shows what Katniss will sacrifice so save her sister. Again.

-Also, Mindy Kaling thinks living in PEI would “be so badass.”

This one hurts: Miley Cyrus and Dane Cook are rumored to be dating.

-Someone remind me again who thought a Point Break remake would be a good idea?