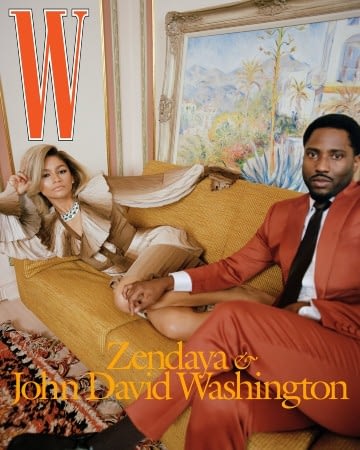 -I can’t help but wonder if Zendaya and John David Washington‘s W issue was supposed to be timed to the Oscar nominations — and Malcolm & Marie ended up with none. The photos sure are pretty though.

-I don’t think anyone guessed it’d be David Fincher’s Mank, a black and white Netflix movie about making Citizen Kane, to lead the Oscar nominations with 10 nods. (Also, despite leading the nominations — and being about screenwriting — Mank failed to score a screenplay nod.)  Weirdly, out of the eight Best Picture noms, the only ones I haven’t seen are the two easily accessible Netflix films.

-I’m shocked that Regina King didn’t make the Best Director cut for One Night in Miami. The movie didn’t score a Best Picture nod either, which is devastating.

-This is rare: Lakeith Stanfield was submitted as a lead actor candidate, but Oscar voters don’t have to follow those category suggestions — and he ended up getting more votes in the supporting actor category.

-Last night’s Grammys ceremony was so well-produced, it made the Golden Globes look even worse in retrospect.

-The show also gave us a new Beyonce meme so there’s that. Also, some more Harry Styles and Lizzo content, which is always welcome.

–Tiffany Haddish found out she won a Grammy while filming Kids Say the Darnest Things and shared the clip.

-We’re going to need a tell-all just on what happened with Jennifer Lopez and Alex Rodriguez over the last three days.  There’s no way that outlets like People ran that story on Friday quoting multiple sources confirming their breakup without some serious insider knowledge. So how to explain the messy “we’re working through some things” correction/ statement on Saturday morning? Either one of them was angry enough on Friday to go to the media, or the way the subsequent break up stories were being spun didn’t sit well.

-The rumours about her getting close with new costar Lenny Kravitz are predictable and likely ridiculous but I’m into it.

-CBS put The Talk on a short hiatus while they investigate Sharon Osbourne’s comments. There’s also reports that she got Holly Robinson Peete fired from the show.

–John Oliver devoted almost his entire show to demonstrate how Tucker Carlson is “the most prominent vessel in America for white supremacist talking points.”

–Rita Ora didn’t show up to be a guest judge on Drag Race UK, so they replaced her with a mannequin. Think anyone noticed?

-I’m not sure I fully agree with it, but this is an interesting take on the WandaVision finale and the concept of “story karma.” Basically, viewers don’t necessarily want beloved characters who do evil to be punished — but we need to know that the show knows they *should* be punished.

–Tori Spelling and Jennie Garth denied former costar Vanessa Marcil’s claims about how catty the set of Beverly Hills 90210 was.

–Joe Cornish says he and John Boyega have been bouncing around ideas for Attack the Block 2. I need it!

-Here’s the final trailer for Falcon & the Winter Soldier before it drops this weekend.

-Maybe it’s because I’m so desperate to go to the movies again, but I think the new Cruella trailer looks amazing.

-Speaking of going to the movies again, will the quick rollout of the vaccine in the US set In The Heights up for big box office success this summer?