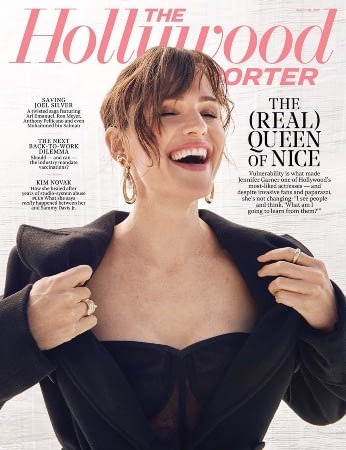 –Jennifer Garner‘s profile in THR is full of goodness. She talks about a possible Alias revival (“Sign me up. I’ll grab Bradley [Cooper] by the scruff of his neck”), her ex-hubby Ben Affleck (“People are in awe of him. He’s done incredible things, he’s six-four, he’s … him, and [strangers] treat him with a kind of reverence”),  and why she allowed rare photos of their kids at her Walk of Fame ceremony in 2018 (“I don’t have two Oscars on my mantle, I’ve raised them. And I think every little kid has a dream that their mom will have a moment where people applaud her so that they can say, ‘That’s right, I knew it,’ and my kids got to have that and for that I’m grateful”). She also revealed that her daughter Violet was once kicked off a soccer team because the paparazzi caused too much of a distraction.

-It’s Jon Hamm‘s 50th birthday today. Let’s mark the occasion by staring at this glorious pic of him and Jon Bernthal, shall we?

–Natalie Portman and Lupita Nyong’o are both taking their first major TV roles in AppleTV’s new limited series, Lady In the Lake.

–Ryan Murphy set the record straight amid claims by Naya Rivera’s father that he broke a promise to set up a scholarship fund for her son.

-41,000 viewers filed complaints to ITV against Piers Morgan over his comments on Meghan Markle‘s mental health​ — and Meghan Markle was one of them.

-Meanwhile, Morgan tweeted, “On Monday, I said I didn’t believe Meghan Markle in her Oprah interview. I’ve had time to reflect on this opinion, and I still don’t.”  (Sidenote: I didn’t realize until I saw this clip that his hatred of her seems to stem from the fact that they once went out for drinks and then she ghosted him — which makes him even more pathetic than I realized.)

–CBS will re-air Oprah’s interview with Harry and Meghan on Friday night.

-The people behind Grey’s Anatomy keep making noises about this current season possibly being its last. “I’m planning a season and a finale that could function as either a season finale or a series finale,” showrunner Krista Vernoff told The Hollywood Reporter. “I’m planning for both contingencies and it’s hard and it’s not ideal. It’s not where I wish we were.”

–Chloe Sevigny had a secret wedding last year — and she wore black.

–Paris Jackson, 22, defended her relationship with Emile Hirsch, 35, after comments about their age difference. When it comes to Hirsch, his age is the least of my concerns.

–Winston Marshall is taking some time away from Mumford and Sons after praising a right-wing author.

-I don’t watch American Horror Story, but I love that Macaulay Culkin will be in the new season because he deserves all the things.