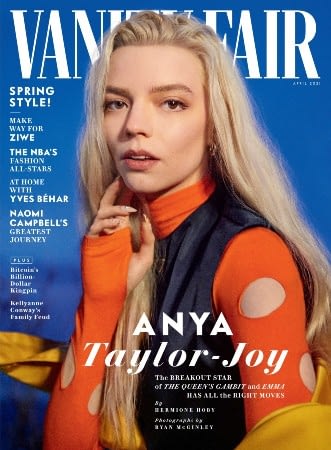 –Anya Taylor-Joy is on the cover of Vanity Fair and talks about how The Queen’s Gambit has propelled her career to stratospheric new heights, with projects lined up alongside Robert De Niro, Chris Rock, Margot Robbie, Christian Bale, Nicole Kidman and Ethan Hawke. “I think I’ll probably understand this year in about five years. I think that’s when it will probably hit.”

–Jennifer Garner appeared on Hot Ones and she was at her most charming. “Ina Garten would be appalled by this behaviour.” “You really had me feeling kinda cocky, didn’t ya?”  “Up your butt, Sean!”

–Prince Harry will become chief impact officer of BetterUp, a fast-growing coaching and mental health firm. This seems like an issue he’s really passionate about, so good for him. (The title makes me laugh though.)

–Prince William and Kate Middleton visited Westminster Abbey, the cathedral where they were wed nearly 10 years ago, to check out its vaccination clinic.

–Thomas Middleditch’s alleged behavior didn’t come as much of a surprise to his former Silicon Valley co-star Alice Wetterlund, who tweeted “Tried to warn you all about Middleditch but noooooo not everyone’s favorite tinyman who looks like he lives in a clock!”

–Hailey and Justin Bieber were spotted soaking up the sun in Turks and Caicos.  I’ve never been more jealous.

-HBO has announced not one, not two, but three Game of Thrones spinoffs: Nymeria, Flea Bottom, and The Sea Snake. It’ll be interesting to see what kind of appetite there is for these, seeing as the reaction to its final season seems to have tarnished its legacy. With all the rewatches people have been doing during the pandemic, that one never comes up.

–Kristen Davis‘ new thriller is no 1 on Netflix — for reasons no one can understand.

-Disney shifted a bunch of movie dates/platforms, with Black Widow and Cruella getting a premium Disney+ launch alongside a theatrical release, while Pixar’s Luca will skip theaters entirely. Also, Death on the Nile moving to Feb 2022. I wonder if that’s because there’s not a big appetite for Armie Hammer movies right now?

–Sean Young does not mince words in this interview. She praises Michael Douglas and Jim Carrey, but calls out James Woods, Warren Beatty, Charlie Sheen, Steven Spielberg and Ridley Scott for toxic behaviour and getting her blacklisted.

-I didn’t see this coming: the villain of Shazam 2 will be played by Helen Mirren.

-Jeopardy! fans are NOT happy that Dr. Oz is guest hosting, and more than 500 past contestants have called for his removal.

-I didn’t realize I needed to see Kevin Bacon singing Backstreet Boys to farm animals, but I really really did.

-As he continues to lose deals, David Dobrik has released a second apology video and announced a social media break.

-Here’s the first trailer for HBO’s documentary on white supremacy, Exterminate All the Brutes.

-Here’s the trailer for HBO’s Victorian-era fantasy series The Nevers, which debuts April 11 and was created by Joss Whedon (who has since left). I didn’t know Demelza from Poldark is in this!