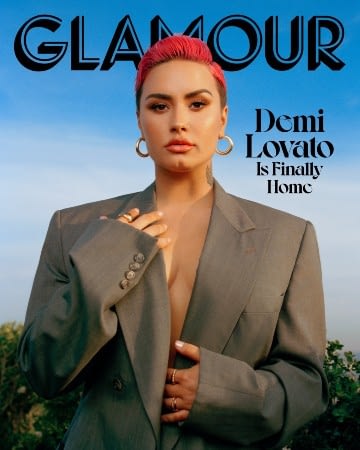 –Demi Lovato covers Glamour to promote her upcoming Youtube documentary and talked about her past issues with food (“I was excited that I was in a comfortable place in my body to show more skin, but what I was doing to myself was so unhealthy”), her sexuality (“I know who I am and what I am, but I’m just waiting until a specific timeline to come out to the world as what I am”), her broken engagement (“Because I denied my intuition of all the red flags that had popped up, I had no one else to blame but myself”), and her new outlook on life (“I am now making choices—for the day, and then the future—about what it is I want and what’s going to make me the happiest”).

–Michael B Jordan got zen for his Men’s Health cover story.

-In Selena Gomez‘s Vogue cover story, she says she’s not done with music — yet. “It’s hard to keep doing music when people don’t necessarily take you seriously. I’ve had moments where I’ve been like, ‘What’s the point? Why do I keep doing this?’ “Lose You to Love Me” I felt was the best song I’ve ever released, and for some people it still wasn’t enough. I think there are a lot of people who enjoy my music, and for that I’m so thankful, for that I keep going, but I think the next time I do an album it’ll be different. I want to give it one last try before I maybe retire music.”

-A Deux Moi blind was posted yesterday about how the first of the Armie Hammer articles would drop today, and it ended up being from Vanity Fair. It’s a good deep dive into his family’s messed up history (including an eye-popping tidbit about how his dad has a sex chair with the family crest on the seat), but when it gets to Armie himself, it goes pretty easy on him. There’s four different quotes from anonymous friends of his dismissing the allegations as simply a kink or evidence of his “dry sense of humour,” and casting suspicions on his estranged wife about the timing of the leaked DMs (despite the fact that she’s seemed remarkably restrained, considering). It also seems to downplay the allegations of assault/abuse his recent exes Paige Lorenze and Courtney Vucekovich have leveled elsewhere.

-It’s interesting to see how the royal family is responding to the Oprah interview. Prince Charles hasn’t officially said anything, though his camp tells Vanity Fair he’s “devastated” because “he feels let down by them both. There is not a racist bone in his body and to suggest otherwise is very hurtful.” Prince William was more direct about going on the defensive, telling the media “We’re very much not a racist family” and that he still hasn’t talked to Harry about it.

-In a new Harper’s Bazaar’s article Omid Scobie quotes from an email he claims that Meghan Markle sent about not making Kate Middleton cry over flower girl dresses. “Well, if we’re just throwing any statement out there now, then perhaps KP can finally set the record straight about me [not making her cry],” she reportedly wrote to an aide.

-Harry Potter’s Katie Leung says publicists instructed her to pretend she wasn’t the target of racist vitriol by fans while playing Cho Chang in the films. “I remember them saying to me… ‘just say it’s, say it’s not true, say it’s not happening.'”

-Oh god, Matthew McConaughey is rumbling about going into politics.

-I had no idea there was a spinoff of The Boys in the works, but I’m here for it.

–Priyanka Chopra and Nick Jonas will announce the Oscar nominees on Monday morning. Seems like an odd choice but ok.

–Emmy Raver-Lampman and Daveed Diggs‘ house is featured in Architecture Digest and it’s so colourful and fun.

–Adam McKay is the executive producer on a new HBO doc about QAn*n. Here’s the first trailer.

-Here’s the trailer for Anya Taylor-Joy and Finn Cole‘s new film, Here Are The Young Men.