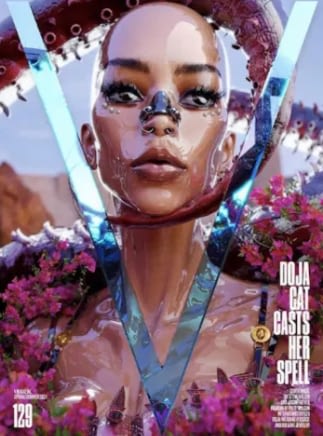 –SZA interviewed Doja Cat for V Magazine. The interview is good but the photos freak me out…

–A new clip from Meghan Markle‘s chat with Oprah has been released and it focuses on why she’s “ready to talk” now. When asked why she turned down Oprah’s interview request during her engagement, she said, “We’re on the other side of a lot of life experience that’s happened. We have the ability to make our own choices in a way that I couldn’t have said ‘yes’ to [earlier]. That wasn’t my choice to make.” She added, “As an adult who lived a really independent life to then go into this construct that is different than I think what people imagine it to be, it’s really liberating to be able to have the right and the privilege in some ways to be able to say, ‘Yes, I’m ready to talk,’ to be able to just make a choice on your own, and to be able to just speak for yourself.”

-Meanwhile, the creator of Suits and her costar Patrick J Adams have jumped to Markle’s defense.

–Lil Nas X just delivered the ultimate “This you?” After Tekashi 6ix9ine posted a homophobic joke, Nas X responded with screenshots of Tekashi sliding into his DMs.

-This is why I can’t commit to any more shows on The CW. Despite debuting to great ratings and already being renewed, Superman & Lois will going on hiatus after its 4th episode — and not come back until the middle of MAY.

–Seth Rogen weighed in after his mom tweeted about the orgasms on Bridgerton.

–Ryan Reynolds and Blake Lively donated $250,000 to address the need to end educational and employment gaps between Indigenous and non-Indigenous people in Canada.

-Pose will end with a shortened season 3. “We got to tell the exact story we wanted, as we wanted to tell it, and I’m incredibly honored and grateful,” Ryan Murphy said.

-I already adore The Good Fight — and now Mandy Patinkin has joined the cast!

-I haven’t watched the WandaVision finale yet, but I like this piece on how its weekly release schedule created a deeper relationship between the audience and the show. It feels like the first “watercooler show” since Game of Thrones.

–Gigi Hadid returned to the runway after her pregnancy for Versace.

-Entertainment Weekly has the first official images from Space Jam: A New Legacy — and men on the internet got mad because the animated character Lola Bunny no longer has big boobs. Sigh.

–Cristin Milioti stars in the trailer for HBO Max’s new dramedy series Made For Love.