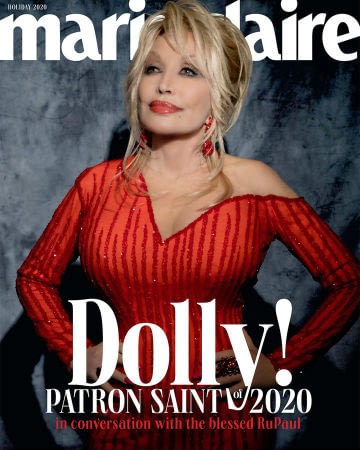 –RuPaul interviews Dolly Parton in the new issue of Marie Claire, and it’s fantastic. Parton tells him: “See, you’re a drag queen. Those are like costumes to you. This is my living self. I am a living drag queen. You dress up just now and then, but for me, though, I like the wigs and I wear them almost every day.”

-So it looks like those early reports of everyone from the franchise coming back for Spider-Man 3 were accurate: Tobey Maguire, Andrew Garfield, Kirsten Dunst and Alfred Molina are all reportedly set to reprise their roles.

–Lori Loughlin‘s daughter Olivia Jade showed up on Red Table Talk and the discussion before about whether she deserves the platform is worth watching. Once she sat down, Gammy didn’t let up.

–Courteney Cox revealed how she got the turkey on her head for that Friends episode, and it’s kinda gross.

-Netflix’s Prom is getting good reviews (if you ignore the James Corden bits).

-This clip of Barack Obama sitting for an interview on Showtime’s Desus & Mero made me smile.

-Yass! Zoey’s Infinite Playlist is returning Jan 5. That’s way sooner than I anticipated, which is a happy surprise.

-This video of George Clooney commenting on classic movies is great, but I’m bummed he’s never seen 10 Things I Hate About You.

-Meanwhile, a bevy of his friends and costars—including Julianna Margulies, David Letterman, Bradley Cooper, Sam Rockwell, Tilda Swinton and Felicity Jones—paid tribute to Clooney at Inside the Museum of Modern Art and Chanel’s virtual evening.

-The fallout from Warner Bros moving all their 2020 movies to streaming on HBO Max continues. From the sounds of it, they bungled the announcement and didn’t warn their talent that it was happening. Christopher Nolan slammed them in a statement to THR, saying, “Some of our industry’s biggest filmmakers and most important movie stars went to bed the night before thinking they were working for the greatest movie studio and woke up to find out they were working for the worst streaming service.” I think they could have handled the communication to the producers/directors/actors better, but given the state of the world it was still the right choice to make. And calling HBO Max “the worst streaming service” shows how little Nolan has dealt with streamers.

–Shawn Mendes says he’s taking Camila Cabello to his parents’ place in Pickering for the holidays.

–Emily Blunt is hopeful that an Edge of Tomorrow sequel with Tom Cruise might actually happen.

–Matthew McConaughey continues to get heat for his “let’s all just get along ” bs while the U.S. is sliding towards fascism.

-Wow, I adored the first Euphoria special, which is just Rue and her sponsor eating pancakes in a diner. Sepinwall nails it: “”The show’s rare quiet moments were so powerful, they couldn’t help prompt the question of how good the series as a whole could be if it ever switched to decaf for a while…Necessity is the mother of invention — or, in this case, of restraint. The precarious (and expensive) nature of Covid-era production forced Levinson to take a low-fi approach that otherwise would not have been likely for a proper Season Two premiere. And it results in a spectacular hour that captures nearly all of the series’ strengths, without any of its weaknesses.”

-Everyone’s freaking out over the way Nigella Lawson says “microwave” in this clip.

-Here’s the trailer for the Viggo Mortensen-directed Falling, which got a lot of buzz on the film festival circuit.