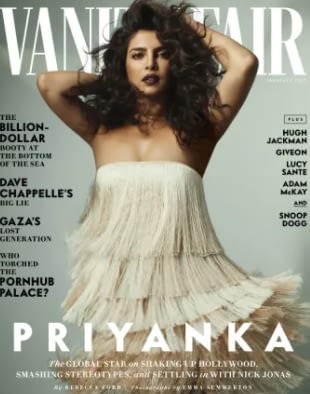 –Priyanka Chopra covers Vanity Fair and talks about the social media frenzy that followed after she dropped Nick Jonas‘ name from her Instagram handle. “It’s a very vulnerable feeling, actually, that if I post a picture, everything that’s behind me in that picture is going to be zoomed in on, and people are going to speculate.”

–Britney Spears has responded to her sister Jamie Lynn’s recent ABC News interview in multiple Instagram posts. Britney’s first post mentioned that she had a fever of 104 but her security team wouldn’t leave the premises to get her medicine (or, presumably, a covid test?!), while her latest post said that her sister had “stooped to a whole new level of LOW” and denied Jamie Lynn’s story that she once grabbed a knife and locked them in a room.

–Pete Davidson won’t be hosting the Oscars, mostly because he’s too tied to NBC and the show airs on ABC.

-Meanwhile, unverified leaked audio of what seems to be Kanye West’s newest single has the lyric, “God saved me from that crash/ just so I can beat Pete Davidson’s ass.”

-Black Panther: Wakanda Forever has resumed filming after Letitia Wright was injured in a stunt almost five months ago. (Is it horrible that when I first heard about her injury, I didn’t think that was the real reason she couldn’t film?)

-Everyone leaving Lady Gaga hanging out to dry in this clip from an actress roundtable is amazing.

–Geena Davis says she was once denied a role because the leading man said she was too old, even though he was older than her.

-This is an excellent debate on the quality of Station Eleven. Personally, I think it’s the best show I’ve seen in ages, but it took me a while to figure out that I liked the odd numbered episodes so much more, and that was because the even numbered ones tended to focus on the travelling symphony. I still haven’t watched the finale yet cause I adored episode 9 so much, I kind of want to savor it.

-Speaking of buzzy shows, I like this piece about how Yellowjackets is great because you can either get really deep into theorizing or just ignore the theories completely. (I need to catch up on episodes, but I also think the comparison to Annihilation is spot on.)

-Aw man, Netflix is raising its prices again in the US and Canada.

-Orange Is the New Black’s Danielle Brooks showed off her wedding pics. That dress is stunning.

-FX has ordered a Justified revival, with Timothy Olyphant set to return as Raylan in the limited series.

–Alec Baldwin turned over his cell phone to law enforcement officials as part of the investigation into the fatal shooting on the set of the film Rust after it was reported that he’d failed to do so despite a search warrant.

-Here’s the trailer for Netflix’s limited series Inventing Anna, which is Shonda Rhimes‘ latest and is getting lots of buzz.