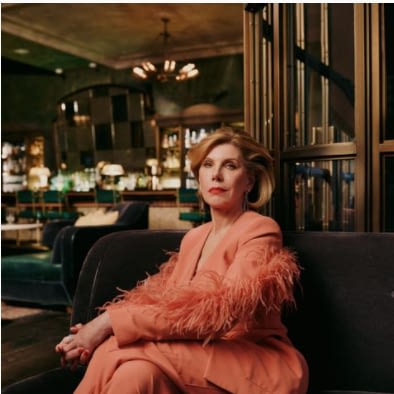 -Any day there’s a new Christine Baranski photoshoot is a good day. She talks about her habit of playing  imperious grande dames: “It’s funny because I’m from this blue-collar neighborhood in Buffalo. I don’t know how it happened.”

-Meanwhile, I haven’t watched The Gilded Age premiere yet, but it’s probably a bad sign that the two reviews I read about it quoted Aretha Franklin’s “Great gowns, beautiful gowns.”

–Kim Kardashian may have gotten famous thanks to a sex tape, but she’s denying Kanye West’s claims that there is more footage of her and Ray J.

–Kanye West reportedly thinks Kim Kardashian‘s relationship with Pete Davidson is “fake” and he’s sick of the family making “up story lines for their lives.” Wouldn’t it be hilarious if he were the one to pull back the curtain on what makes the Kardashian empire tick?

-Speaking of hilarious, he’s also reportedly been dissing Pete Davidson for looking like he gets his clothes ‘from the mall.’

–Cheryl Hines responded to a tweet about her husband, saying “My husband’s opinions are not a reflection of my own. While we love each other, we differ on many current issues.” Ok, but her hubby Robert Kennedy Jr. just compared vax and mask mandates to the Holocaust, so it’s a bit bigger than a difference of opinion. (She’s been shooting the second season of The Flight Attendant so she’s presumably vaxxed.)

–Cardi B won a defamation verdict against a YouTuber who spread rumors of herpes and shocking sex acts. The rapper won $1.25 million damages, with possibly more on the way.

–Paris Hilton and Jimmy Fallon comparing their Bored Apes NFTs is really disturbing. How are we normalizing this?!

–Tiffany Haddish joked about her recent DUI arrest while on Jimmy Fallon‘s show. “I can say this, Jimmy…I’ve been praying to God to send me a new man. A good man. And God went ahead and sent me four—in uniform.”

-Speaking of Haddish, Girls Trip is finally getting a sequel.

–Peter Dinklage recently called Snow White a “f—ing backward story about seven dwarfs living in a cave,” saying he was “taken aback” that the new adaptation was moving forward. Disney has responded, “We are taking a different approach with these seven characters and have been consulting with members of the dwarfism community.”

-A source in Olivia Munn‘s camp tells Us Weekly that her and John Mulaney’s relationship has been strengthened since their son’s birth in November.

-Deadline’s Read the Screenplay series is a really great way to read the scripts from this year’s movie awards race. What an excellent resource for anyone hoping to break into the writing biz.

–Alicia Witt opened up about the sudden passing of her parents, who were both found dead in their home days before Christmas. Reports suggest a space heater may have caused their deaths, and the actress said, “I hadn’t been allowed inside my parents’ home for well over a decade; every time I offered to have something repaired for them, they refused to allow workers into their house.”

-CBS renewed Ghosts, and this is the cute way they told the cast.

–Sydney Sweeney credits Euphoria creator Sam Levinson for agreeing to cut out some of her topless scenes from the second season. “There are moments where Cassie was supposed to be shirtless and I would tell Sam, ‘I don’t really think that’s necessary here.’ He was like, ‘OK, we don’t need it.’ I’ve never felt like Sam has pushed it on me or was trying to get a nude scene into an HBO show. When I didn’t want to do it, he didn’t make me.” I mean, I’d suggest maybe the writers shouldn’t have including so many topless Cassie scenes in the first place, but everything about Euphoria this season puts me in old lady prude mode.

–John Krasinski has cast his Office costar Steve Carrell in his new movie.

-Bravo finally axed Jennie Ngyuen from RHOSLC, saying “We recognize that we failed to take action once her offensive social media posts were brought to our attention.” Controversial social media posts appearing to promote White Lives Matter from 2020 resurfaced this week.

–Franz Ferdinand is back! Here’s their new music video.

–Marilyn Manson‘s attorney has issued a statement denying Evan Rachel Wood‘s allegation that he raped her on camera during a 2007 music video shoot. “Brian did not have sex with Evan on that set, and she knows that is the truth.”

–Neil Young is demanding Spotify remove his music over their partnership with Joe Rogan.

-Based on buzz, it feels like the Sundance movies everyone is talking about are Palm Trees And Power Lines (which is getting lots of Red Rocket comparisons), Cha Cha Real Smooth (a crowd-pleaser starring Dakota Johnson), and Good Luck to You, Leo Grande (a two-hander with Emma Thompson and Daryl McCormack).

–Emma Thompson talked about doing her first fully nude scene in Good Luck to You, Leo Grande, in which she plays a widowed school teacher who hires a young male escort. “I don’t think I could’ve done it before the age that I am.”

-I was not expecting the hottest new trend in Hollywood to be following Greek philosopher Epictetus’ advice on stoicism.

-I had no idea there was a Jamie Foxx-directed comedy where Robert Downey Jr. plays a Mexican. It seems like it won’t see the light of day.