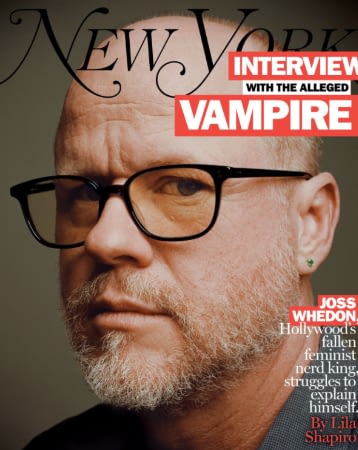 -I’m bummed that New York magazine gave a full profile feature to Joss Whedon. Did he really need this big of a platform? Again? Luckily, it doesn’t come off as a redemption piece, but only because the man can’t stop playing the victim. Every answer he gives is pretty much a disaster. He talks about having affairs with actresses on the Buffy set: (“‘I feel fucking terrible about them,’ he said. When I pressed him on why, he noted ‘it messes up the power dynamic,’ but he didn’t expand on that thought. Instead, he quickly added that he had felt he ‘had’ to sleep with them, that he was ‘powerless’ to resist. I laughed. ‘I’m not actually joking,’ he said. He had been surrounded by beautiful young women — the sort of women who had ignored him when he was younger — and he feared if he didn’t have sex with them, he would ‘always regret it'”), he blames the Justice League reshoot issues on the cast’s behaviour, saying Gal Gadot simply didn’t understand his jokes (“English is not her first language, and I tend to be annoyingly flowery in my speech”) and casts doubts on Ray Fisher‘s motives for speaking out (“We’re talking about a malevolent force. We’re talking about a bad actor in both senses”). The piece actually ends with him saying, “I think I’m one of the nicer showrunners that’s ever been.” Oh, and he alludes to possibly being responsible for another kid’s death when he was five. An absolute and total catastrophe of an interview.

–Ray Fisher has responded to Whedon‘s new comments against him through Twitter: “Rather than address all of the lies and buffoonery today — I will be celebrating the legacy of Reverend Dr. Martin Luther King Jr. Tomorrow the work continues.”

–Prince Harry says he won’t visit the UK until he can pay for police protection. He’s tried hiring private security but UK intelligence won’t share with them the credible threats. And to make matters worse, the timing of the story is gross.

–Tiffany Haddish was arrested in Georgia on suspicion of DUI.

–Britney Spears seems to be open to the idea of making amends with her younger sister, Jamie Lynn. “I admire you for being strong … just know I love you and I think you know that already more than anything!!!”

-Meanwhile, Kanye West went on Instagram Live to complain that he wasn’t invited to daughter Chicago’s birthday party — but Kim Kardashian was reportedly shocked he said that. He was later pictured at the party.

-Oh no. Bryce Dallas Howard is the latest celeb to start promoting NFTs.

–Kendall Jenner insists she asked her friend’s permission before she showed up to her wedding in that barely there dress.

-Is Chloe Sevigny shooting her shot with Jason Momoa via Instagram?

-God, what a stellar week of TV. First up was the Station Eleven finale, which left me crying happy tears. For a pandemic show based on a somewhat bleak book, those last 10 minutes were the most uplifting thing I’ve seen in ages.

-The other big finale everyone’s talking about is Yellowjackets. I love that the showrunners aren’t afraid to shoot down fan theories. Meanwhile, there’s been some great writing about this show, including this piece on how it embraces its gen x roots, this revealing interview with the showrunners, as well as the various excellent weekly recaps.

-Speaking of Yellowjackets, this is a great interview with Christina Ricci, who is stealing the spotlight every week amid a whole show full of scene stealers. She talks about moving to New York when she was a teen and choosing her apartment because it was in her favourite book (“I lived in the Police Building in Little Italy. We moved into that building because I was obsessed with The Alienist”) and how people treat her worse on the Yellowjackets set as soon as she’s dressed as Misty (“I was just, like ‘Oh, this is so interesting, that just because I’m wearing this wig and glasses they’ve forgotten I’m No. 3 on the call sheet'”).

-In other Yellowjackets cast interviews, Melanie Lynskey says her three leading co-stars supported her when she was body-shamed on set by a producer.

-I liked this piece about how we’re finally moving away from mystery-box TV.

-Scream had a really strong opening weekend at the box office.

-Game of Thrones’ Nikolaj Coster-Waldau fights the elements in the Against the Ice trailer.