–Brad Pitt made a 12-second appearance on John Krasinski‘s web show and it’s all anyone can talk about. (Fastforward to the 7-min mark.) The power!

-Meanwhile, Alia Shawkat of Arrested Development fame was spotted riding her bicycle over to Brad Pitt’s gated community on her birthday this weekend. But everyone’s still insisting they’re just friends.

–Robert Pattinson and Suki Waterhouse are still going strong and are isolating together.

-In advance of Friday’s hearing against the Associated Newspapers, Meghan Markle‘s lawyers laid out their charges of invasion of privacy and copyright infringement against the Mail on Sunday. Meanwhile, she and Prince Harry sent letters to various British tabloids, making it clear they would no longer deal with them.

–Cole Sprouse had a rough weekend. He took to his Instagram Stories to yell at fans who doxxed him and speculated about his relationship status with Kaia Geber.

–Eva Mendes explained to an Instagram commenter why she doesn’t post pictures of her life with Ryan Gosling: “Since my children are still so little and don’t understand what posting their image really means, I don’t have their consent. And I won’t post their image until they’re old enough to give me consent. As far as Ryan and I, it just works for us this way, To stay private.”

-Did you miss the One World: Together At Home extravaganza on Saturday night? Here are some of the best performances.

–Ryan Reynolds and Hugh Jackman are burying the hatchet on their “feud” for charity. The winner will have them to fly to their house and set up a lemonade stand with them.

-The cast of Chuck reunited on Zoom for a table read of an episode from season 3.

-Speaking of fun Zoom reunions, the cast of That Thing You Do did a rewatch party.

-Stumptown stars Cobie Smulders and Jake Johnson reunited on Instagram, and she sang “Let’s Go to the Mall” from How I Met Your Mother.

-Angel star J. August Richards came out as gay during in an Instagram chat today with Sarah Wayne Callies, his co-star on the new NBC show Council of Dads. “I knew that I could not portray this gay man honestly without letting you all know that I am a gay man myself…and I’ve never done that with the people that I’ve worked with.”

-There are rumours that Marvel is planning a virtual Hall H on the Saturday of Comic-Con to release trailers and really all studios should be doing this.

–Issa Rae and Kumail Nanjiani‘s The Lovebirds, which was supposed to premiere in theatres on April 3, just got a Netflix release date instead: May 22.

–Tom Hanks and Rita Wilson opened up about the intense coronavirus symptoms they were dealing with and it sounded horrible.

–Oprah‘s TV doctors keep screwing up when it comes to covid-19.

–Ashton Kutcher and Mila Kunis announced a partnership with Stephen Amell‘s Nocking Point to sell “Quarantine Wine,” with 100% of profits going to four different covid-19 relief charities. I wish when celebrities sat in their mansions and urged fans to buy things/donate to charity, they’d start by telling us how much they’ve donated or what material thing their doing with their wealth to also help. That would make these things so much more palatable. This is PR 101.

-I don’t know why this old Jesse Eisenberg interview made the rounds on Twitter again this weekend, but I will watch it whenever it crosses my timeline. His “hey, you’re on my time” makes me double take every time, even though I know it’s coming.

-The honest trailer for Cats is honestly delightful. 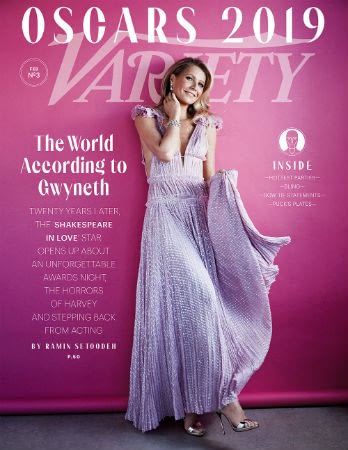 -In her new Variety cover, Gwyneth Paltrow talks about how her new husband Brad Falchuk referenced Shakespeare in Love in his vows (“I hope this isn’t too personal but in my husband’s wedding vows, he actually said it’s no coincidence that I played this muse, because that’s who I am to him, and his perception is that’s who I am in real life. It was really sweet”), added more fuel to the rumours that her onscreen hubby Robert Downey Jr. dies in this spring’s Avengers: Endgame by saying it’ll be her last MCU movie, and says of her struggles with Harvey Weinstein, “He was a bully. I never had a problem standing up to him. I wasn’t scared of him.” Which, good for her I guess, but a lot of women who weren’t at her level didn’t have the luxury to stand up to him and not be destroyed.

–Lady Gaga and fiance Christian Carino have called it quits.

-It’s a big day for breakups. Khloe Kardashian and Tristan Thompson are also done following a new round of cheating rumours.

–Kim Kardashian is lashing out at sites that sell fashion knockoffs after a vintage Thierry Mugler gown she wore to Sunday’s Hollywood Beauty Awards has already been copied.

-Celebs are mourning  Karl Lagerfeld (even though he was kind of a turd).

–This interview with Macaulay Culkin and Devon Sawa reminiscing about their days as 90s stars made my day.

–Darren Criss and Mia Swier got married over the weekend and good for them but my god what is this dress?!?

-There are rumours that Armie Hammer might be the next Batman (which is the most boring choice imaginable) but he’s denying them. Or possibly negotiating through the press? It could go either way.

-Netflix officially got out of the Marvel business by cancelling The Punisher and Jessica Jones yesterday. The stars of those shows took to social media to thank their fans.

–Aaron Sorkin is in “conversations” to bring back The Newsroom which is just … ugh. This thread about possible plots is more entertaining than that show ever was.

–Meghan Markle is in NYC to celebrate her baby shower with her girlfriends.

-Arrested Development returns to Netflix on March 15. I just can’t bring myself to care about a Jeffrey Tambor show anymore.

–Emma Thompson, who had begun recording one of the voice roles in Skydance’s upcoming animated feature Luck, has quietly left the project because of concerns about working with John Lasseter, sources say.  That’s putting your money where your mouth is and I love her even more now.

–Jussie Smollett’s hours on Empire have been cut back while everyone tries to figure out wtf is going on. Meanwhile, police are investigating whether he was seen with his alleged attackers hours before the assault.

–Cardi B is not happy about this whole situation.

-I’m so glad to see that the reviews for Pamela Adlon‘s new, Louis CK-less season of Better Things indicate the show is stronger than ever.

–Dwayne Johnson helps a family who dreams of joining World Wrestling Entertainment in the Fighting with My Family trailer.

And back at the LA women's march, Viola Davis is now addressing the crowd https://t.co/Kh2niSEh8E

-Celebrities joined the women’s march on Saturday and offered some rousing speeches. Scarlett Johansson (not a particularly unproblematic spokesperson but ok) talked about gender equality, Halsey wrote a gutting poem, and Viola Davis brought the roof down.

-On the day when hundreds and thousands of women took to the streets, Ciara shared a video that tells women how to find a husband. Gross.

-Every time Jennifer Garner calls her Alias costar Victor Garber “spy daddy,” I get a little choked up.

-Oh. My. God. Jemaine Clement and Taika Waititi are bringing the vampire mockumentary What We Do in the Shadows to the small screen. This is incredible news.

-It was a weekend of famous dudes that I didn’t even know were in a relationship getting engaged. Ed Sheeran debuted his new relationship status on Instagram, and Darren Criss popped the question to Mia Swier.

–Tiffany Haddish and Andy Serkis will announce the Oscar nominations tomorrow. Uh oh. Does this mean she isn’t getting one? Because that seems to be the trend with announcers lately.

–Tracee Ellis Ross clarified her Blackish salary dispute, and seems to dispel the rumours that she threatened to cut back on her hours.

-If Stranger Things star David Harbour wants to dance with penguins, then internet, we need to make that happen!

–Olivia Munn texted Anna Faris to make it clear that she’s not dating Chris Pratt, despite what the tabloids say.

-The Stark sisters are sticking together IRL. Maisie Williams is going to be Sophie Turner’s bridesmaid.

-On the SAG Awards red carpet, Alison Brie addressed the allegations of sexual misconduct made against her brother-in-law, James Franco by saying: “I think that above all what we’ve always said is that it remains vital that anyone that feels victimized should and does have the right to speak out and come forward.”  So good! If she had stopped it right there, it would have been perfect. But then she had to go and add “not everything that’s been reported has been accurate, so I think we’re waiting to get all the information.”

-Speaking of stars I like putting their foot in their mouth, William H Macy said at the SAGs: “It’s hard to be a man these days. I think a lot of us feel like we’re under attack and that we need to apologize, and perhaps we do.” He goes on to talk about what men can do as part of the Times Up movement, but that first part…yeesh.

-It turns out it was Lily Tomlin that Morgan Freeman was calling out at the start of his SAG speech.  I thought he was reprimanding someone for being on the phone or something.

–Alexander Skarsgård brought his longtime BFF Jack McBrayer as his SAG Awards date. I didn’t know these guys were buddies, and now I’m obsessed with how that possibly came to be.

-Also, Skarsgård may be in the second season of Big Little Lies (which makes no sense).

–Nick Offerman has no use for your Ron Swanson parody account.

-Some hits are starting to emerge from Sundance already. I love that The Miseducation of Cameron Post is getting such raves because that book was wonderful. Lizzie is also sparking buzz, possibly because Kristen Stewart and Chloë Sevigny have hot barn sex and axe-murder a man together.

-This is a really good piece on how some of the pop culture romances we loved when we were young actually glorify or excuse predatory male behaviour.

-The Resident, Fox’s new medical drama starring Matt Czuchry and Emily VanCamp, debuted last night — but all anyone is talking about today is how one of the show’s staff writers managed to get a job there since he was investigated for sexual harassment on his two most recent shows, The Night Shift and Code Black.

-There’s a new Wrinkle in Time trailer. The more I see of this thing, the more I can’t wait!