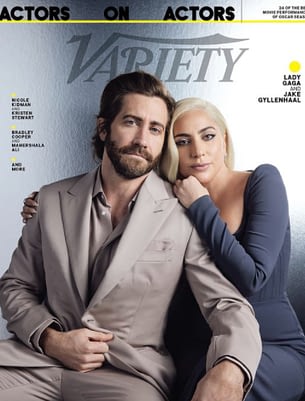 –Jake Gyllenhaal and Lady Gaga interviewed each other for Variety and I ended up watching the whole damn video because I was pretty interested by their chemistry. (She started off a little standoffish, while he went in hot with the charm.) If you just want to see some short clips, here’s her gushing about Donnie Darko, and him gushing about House of Gucci. (Also, is Jake here for The Guilty? I liked that Netflix movie a lot but is it really in the awards convo?)

-Meanwhile, a photo from this shoot has already turned into a meme. This one is my favourite so far.

–Courteney Cox nabbed a People cover to promote her new home-care line, and she talks about her boyfriend of eight years, Johnny McDaid. “He’s just so smart, and I find that really sexy. And then he is gorgeous.”

-Less than a year after Macaulay Culkin and Brenda Song welcomed their first baby together, the couple got engaged.

-This story is so weird. Someone tweeted this week that Dakota Johnson once locked customers inside of a café in 2016 (there’s even a pic), and it turns out someone else had tweeted about the same incident last year. Vulture did an investigation to determine if it really happened (and it seems like it did!), which includes this amazing line: “How does one live with the knowledge that at a moment’s notice, a star of Suspiria could spontaneously lock you in a coffee shop? Do you live in fear that Mia Goth might padlock you into a La Colombe?”

–Prince Andrew is demanding a jury trial in Virginia Giuffre’s sexual assault case. He also denied all allegations of wrongdoing.

-It’s a bad week to be a racist on a reality TV show. Alina Kozhevnikova has been fired from 90 Day Fiancé after offensive social media comments surfaced.

–Rihanna may not be making music, but she is making a $15 million donation to climate justice organizations.

-A vocal minority of fans are taking issue with comments from The Batman’s Robert Pattinson, who confirmed his version of the character does not kill — even though that’s been the rule in the comics for decades.

–Mandy Moore rewatching A Walk To Remember on its 20th anniversary makes me want to see it again. The first hour of that movie is perfection.

-Also, she and Shane West reminisced about their mutual crushes when shooting the movie.

–John Leguizamo talked about about colorism and Hollywood: “I stayed out of the sun so I could work. I definitely would not go in the sun for years. It was a conscious thing…All the Latinos that made it so far, a lot of them were light-skinned.”

–Cardi B wants to chat with Megan Markle and I want that too!

-Spotify has confirmed that Neil Young’s music will be removed from their platform at his request after he said he didn’t want to share a platform with Joe Rogan.

–This is an amazing look at the making of John Cameron Mitchell’s Shortbus (the 2006 movie that featured real sex and is being re-released in select theatres) and it wonders whether it could be made today? My guess is no — not just because of the challenge of getting it financed, but also because it feels like the pop culture has shifted a bit puritanical lately. The young ‘uns in the fandoms I follow and BookTok are always clutching their pearls about something or other…

-Of course, the outlier is Euphoria, which is all excess all the time. I do find myself exhausted by this season, not because of its over-the-topness, but because it seems more aimless than the first season. This HuffPo review nails it: “Euphoria needs an actual, enthralling plot. Instead, the series is shrouded in sensationalism and shock value, utilizing trauma as the sole vehicle for a shoddy storyline and lackluster character development. Its greatest pitfall is the absence of an objective.” (I’ve also been thinking a lot about TV shows using trauma as a signifier of prestige).

-Season two of Starstruck comes out Feb 7 on the BBC! (I have no idea when Crave will pick it up, but hopefully soon after.)

-This thread about strange celeb encounters is a treat!

-The reviews for Hulu’s Pam and Tommy miniseries are good, with critics especially praising the performances from Lily James, Sebastian Stan, and Seth Rogen.

–Claire Danes has joined Jesse Eisenberg and Lizzy Caplan in FX’s upcoming limited series Fleishman Is in Trouble. I loved that book and am increasingly looking forward to this show.

-An outcast’s wish comes true in the Supercool trailer.